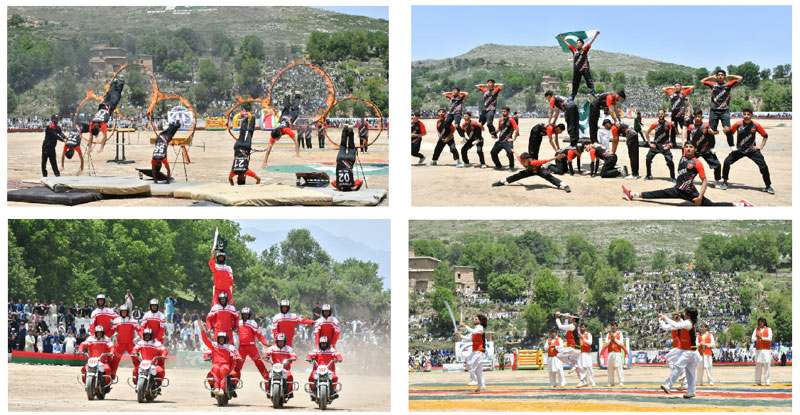 Tirah area of Khyber tribal district which was once considered a symbol of terrorism. Following the terrorist attacks and the sacrifices of the Pakistan Army and local people, peace is restored in the area. Repatriation of TDPs is continue and families are returning back to their villages in Tirah valley. The development journey in the area is going on very fast and holding of various events in Tirah is the guarantee of peace.

In this regard, the District Administration, Pakistan Army and Frontier Corps North jointly organized “BaghAmanMela” from May 23 to 25. In this mega event, children waved the national flag and presented various tableaus.

While marching in, the band received special accolades from the spectators through beautiful melodies. On this occasion, the bike rides of the Pakistan Army Military Police also demonstrated their skills.

Khattak dance and other regional dances were also performed at the festival. Cadet College Warsak students also showed the essence of gymnastics and equestrian at the festival. The highlight of the BaghAmanMela was paragliding, power gliding and free fall jump.

A large number of people from other tribal districts of Khyber Pakhtunkhwa attended the BaghAmanMela.

Also in attendance were Senior Civil and Military Officials, tribal elders, area residents, children and other guests from various walks of life.

The BaghAmanMela, which continues till May 25 also featured competitions in cricket, volleyball, equestrian, tug-of-war and other local games.