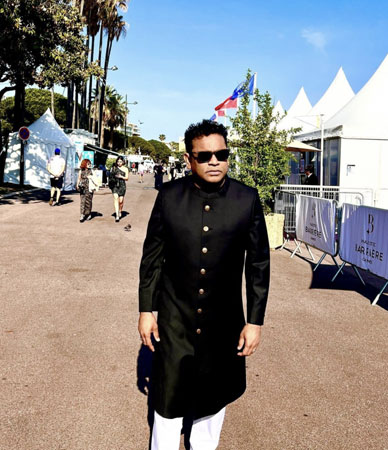 Oscar-winning Indian composer A. R. Rahman jetted to Cannes this week to attend the 75th edition of the city’s renowned film festival. Besides walking the red carpet and attending film premieres, the singer and songwriter was spotted at the Saudi pavilion where he was welcomed with Saudi coffee. “Taking pride in the Kingdom’s legacy of generosity, Saudi coffee is being prepared at the Cannes Film Festival,” the Ministry of Culture in Saudi Arabia shared on Twitter, adding images of Rahman at the Saudi pavilion.

Saudi coffee is heavily associated with generational hospitality and generosity, providing a close connection to the country’s customs and traditions.

In January, the Ministry of Commerce announced that the commercial name of Arabic coffee will be officially changed to Saudi coffee in the Kingdom’s restaurants, cafes, stores and roasters.

The announcement, by ministry spokesman Abdulrahman Al-Hussein, is in conjunction with a Culture Ministry initiative in naming 2022 as the “Year of Saudi Coffee” as a way to strengthen the identity and culture of Saudi Arabia.