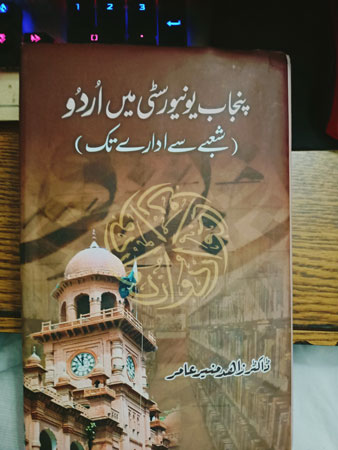 It is amazing that in his book Punjab University Main Urdu – Shobey Sei Idare Tak, Professor Dr Zahid Muneer Aamir has summed up the history and growth of Urdu language from British rule to the present day in Punjab University.

Before the advent of Punjab University, Calcutta University was catering for the needs of students from Burma to Punjab covering the northern India. The mode of teaching was only through English language. Right from day one when the mode of education was based on the speech of Lord Machally on July 10, 1833 in the British Parliament, contradiction existed with the prevalent Indian culture. Initial impression was that the great bulk of scholars never attain more than a superficial knowledge, either of English or of the subject they study in that language, while the mental training imparted is as a general rule of a purely imitative character. It was basically due to use of a foreign language. Anjuman-e-Punjab was created on January 1, 1865 followed by Oriental University. The idea was to teach Eastern subjects to the masses – Page 18. Soon U Aitchison, Deputy Commissioner, Lahore and Brandreth Commissioner joined hands. So the clash between Western and Eastern civilisations that we talk about even today was first felt by these guys. The proposal was sent to the Lieutenant Governor. He even agreed that one cannot teach the civilisation of an area on a foreign language. Even in England help from Latin and Greek languishes were sought for refinement.

One solution was that Calcutta University would make changes in its way of working or a new university was formed. Now the question arose as to where stones of this new University were laid. Aitchison fought the case in favour of Lahore. It may be noted that Punjab Public Library, Lady Aitchison Hospital, Town Hall etc. were built during his tenure as Secretary, Punjab and Lieutenant Governor. It was agreed that teaching shall be imparted in this university apart from taking examinations. Despite opposition from certain other quarters this university was formed in October 1882. One of the purviews of this university was to afford encouragement to the enlightened study of Eastern classical languages and literature. If activists of propagation of Punjabi language be adopted in Punjab from primary level still gather every year on ‘Maan Boli Dehaar’ showing its solidarity to the provincial government in wake of Supreme Court Orders, the situation about our national language is no different. Zahid Munir Amir complains that according to Pakistani 1973 Constitution, stating that arrangements are made for Urdu for official or other purposes within 15 years from commencing day; no progress has been made despite more than half a century has passed.

The writer thanks the Vice Chancellor Professor Dr Niaz Ahmad who gave permission to publish this book, the first chapter of which is the story of start of Punjab University. University College Lahore was created in May 1870. The first session of the senate presides by Sir Donald McLeod agreed to promote the diffusion of European Sciences, enlighten Eastern Classical Languages, and associate the learned and influential classes of the province with officers of the government in the promotion and supervision of proper education. The dream of Anjuman Punjab to have an educational institution for Eastern Subjects was fulfilled in March 1872 in the shape of Oriental College. The long story of the creation of Oriental College is covered in the second chapter of the book. A list of Head of Urdu Department appears 0n Page 67 from 1948 onwards. It starts with Dr. Syed Abdullah from 1948 to 1962 to Zahid Munir Amir from 2021 till to-date. Details of all the sessions for the purposes of teaching appear in the section titled ‘Tadreesi Paishraft’ from page 71 to 125. It also mentions how Corona Days were usefully utilised. Research development has been dealt in detail from Page 131 onwards. It gives the Examiners panel, new topics, new deadlines, admissions in Spring and Autumn, importance of attendance, new topics and examiners, and so on. Details of online exams experience is also shared. The redeeming factor was that teaching and research activities continued during pandemic lockdown. A separate chapter has been reserved for the work being carried out for advancement of Urdu language abroad. The countries include Turkey, Iran, Egypt, Italy, Sweden, Europe, South Korea, Copenhagen and Netherlands. For the latter country, novelist Farooq Khalid who is settled in the Netherlands briefed the audience about the history of Urdu language and disclosed that a Dutch student Joshua Kilter wrote the first grammar in Urdu.

Zahid reproduces the details of all international Urdu Conferences in a separate chapter – Pages 269 – 272. A chapter titled ‘Tashkeel-e-Kirdar Ki Masaai’ deals with comprises essays on Seerat-e-Nabi to Quiad-e-Azam followed by the books published by the department and inauguration of books. Essays written abroad on Urdu writers are included from India, Turkmenistan, Turkey, Japan and Egypt.

This book therefore is a reference book for the students and researchers who are looking for the efforts of Urdu Department in Punjab University for advancement of Urdu language. The author Dr Zahid Munir Amir is presently the Director of Urdu Development and Translation Centre, University of Punjab, Lahore.