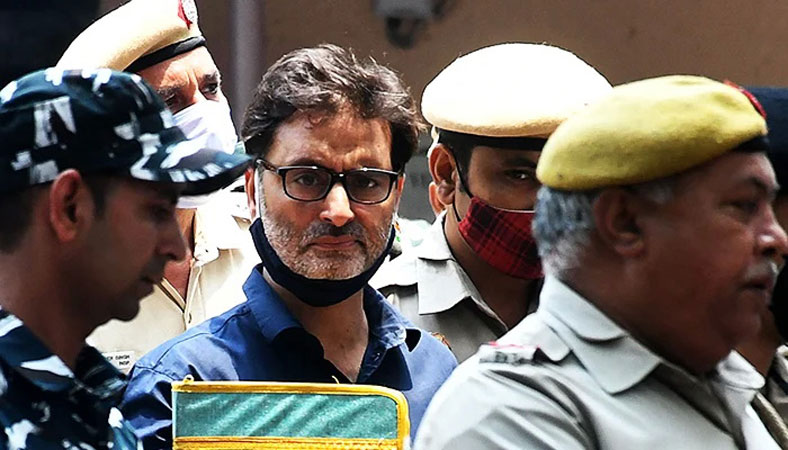 An Indian court has sentenced the illegally detained Jammu and Kashmir Liberation Front Chairman, Yasin Malik, to life imprisonment in concocted cases to punish him for his leading role in the ongoing movement for Jammu and Kashmir’s freedom from the illegal Indian occupation.

Special Judge of India’s notorious National Investigation Agency (NIA), Praveen Singh, officially convicted Yasin Malik on May 19 in manifestly dubious and motivated cases registered against him over three decades ago and fixed hearing today for announcing the quantum of the sentence, the Kashmir Media Service said.

He was presented before the court amid tight security. Hundreds of Indian policemen and paramilitary troops kept him under their siege when he was brought from Tihar Jail to the court.

The Indian Supreme Court has already pronounced that life imprisonment means that the detained person will be kept in jail till he is alive.

The JKLF Chairman, who has been languishing in New Delhi’s infamous Tihar Jail for the last over four years, had told the court earlier that he was not contesting the charges levelled against him under various sections of draconian law, Unlawful Activities Prevention Act (UAPA), and Indian Penal Code including waging war against India as he did not have trust in the Indian judiciary. Yasin Malik was arrested by Indian police from his residence in Srinagar in February 2019 and was later shifted to New Delhi’s Tihar Jail.

Narendra Modi-led fascist Indian government arrested thousands of Kashmiris including Hurriyat leaders and activists and lodged them in different jails of occupied Kashmir and India. The Modi regime is victimizing them for opposing India’s illegal occupation of their homeland and demanding their UN recognized right to self-determination.

The All Parties Hurriyat Conference has said that Modi regime is using judiciary to victimize the illegally detained Muhammad Yasin Malik and other Hurriyat leaders in gross violation of UN resolutions and the international law for seeking liberation of Jammu and Kashmir from Indian illegal occupation. The APHC spokesman in a statement issued in Srinagar maintained India cannot force the Kashmiri leaders to surrender their just cause by using its kangaroo courts. He urged the world community, particularly the UN, to play a role in the release of Kashmiri political detainees to save them from India’s wrath.

“Today is a black day for Indian democracy & its justice system. India can imprison Yasin Malik physically but it can never imprison idea of freedom he symbolizes,” the Prime Minister remarked in a tweet posted on his social media account.

In a statement issued here by the party secretariat, former president Asif Zardari said, “Yasin Malik is the hero of struggle for the independence of Indian Illegally Occupied Jammu and Kashmir (IIOJK).” “Imprisonment and torture could not break the resolve of freedom fighter Yasin Malik,” he added.