Senate condemns mock trial against Yasin Malik with one voice 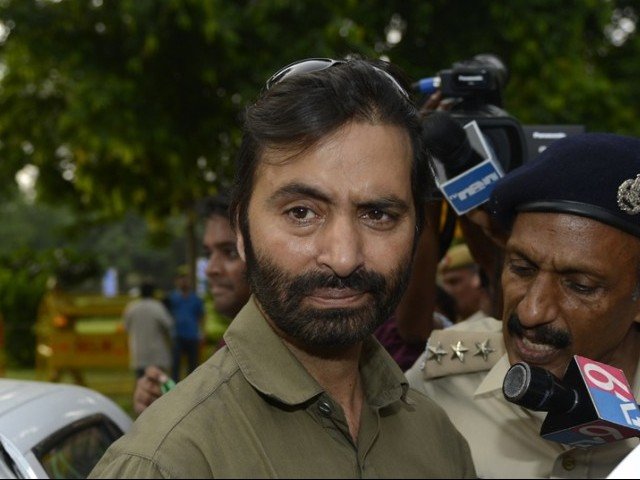 ISLAMABAD: Leader of the House in Senate, Senator Azam Nazir Tarar on Wednesday condemned the mock trial against Hurriyat Leader Yasin Malik by the Indian court bypassing all the local and international human rights laws.

Through this august house, he said the international communities and human rights watchdogs were urged to intervene into the matter and register their protest against the inhumane treatment of political prisoners of Indian Illegally Occupied Jammu and Kashmir (IIOJK).

“This is persecution, not prosecution being conducted against the freedom fighter Yasin Malik by the Indian government,” he added.

Participating in the debate at the floor of the upper house, Senator Kamil Ali Agha said Organization of Islamic Cooperation (OIC) should be taken on board to press India from this inhuman act and take practical steps to resolve the Kashmir issue as per aspirations of the Kashmiri people.

Senator Rana Maqbool Ahmad proposed to invite an emergency conference of the OIC to settle the Kashmir issue on a permanent basis.

Senator Mushahid Hussain Sayed said this was a serious challenge to Pakistan’s Kashmir policy, India policy and those who talk about human rights globally.

“Today, what is happening, it is the territory of justice, a shame trial through a Kangaroo is going to convict a heroic freedom fighter which we reject,” he added.

Keeping in view the worsening situation in IIOJK, he opined that we should move beyond just conferences and words and we must have a clear Kashmir-India policy with no appeasement.

He said we should take RSS and India to the International Court of Justice on the Kashmir issue.

He also suggested that Mishal Malik who is the wife of Yasin Malik should be appointed as a ‘special envoy on Kashmir human rights’ with a diplomatic passport so she could travel and the words should reach all over the world.

Raising the voice of the business community, he said there should be no trade with India which was killing innocent people in the IIOJK.

Senator Irfan ul Haq Siddiqui said Yasin Malik was not the first and last victim of Indian brutalities. He lamented that for the last 73 years, we could not unveil the ugly face of India before the world.

He said we had to sort out our weaknesses and design an active policy on Kashmir to attract the attention of international human rights organisations.

He said we should not expect anything good from Modi – the butcher of Gujrat’s Muslims – or any other leadership of India. He said India was the name of negative thinking which had nothing to do with humanity and human values.

He said for the resolution of the Kashmir issue, we should work together as Kashmir was in our hearts, souls, thoughts, and in dreams.

Senator Taj Haider said we should review our efforts and take practical steps for the resolution of the Kashmir dispute.

The United Nations Human Rights Commission since last three years in its report highlighting that the plebiscite in IIOJK was the only solution but we did not pursue it at international forums properly, he added.

He proposed that we should form a joint delegation of treasury and opposition benches to raise the Kashmir issue at world forums and sensitise the foreign missions on the gravity of the matter.

Senator Danesh Kumar said 10 million people of minorities were standing by Kashmiris through thick and thin. The Indian government had turned the Kashmir valley into the largest prison of the world, he added.

Senator Mohammad Humayun Mohmand said we should remove our weaknesses and raise the Kashmir issue forcefully at the international forums.

Senator Raza Rabbani said all stakeholders should make a clear policy on Kashmir. He said trade was not possible with India as Indian government had perpetuated the cultural and religious genocide in the IIOJK.

He said India was trying to change the demography of the IIOJK through various tactics. He said normal relations with India could not be built until and unless it stopped its negative practices against the Muslims of India and IIOJK.

Senator Faiz Muhammad said there was lack of unity among the Muslim Ummah which was the main factor because of that Khashmir issue was lingering for many a decade.

Senator Muhammad Asad Ali Khan Jonejo said the United Nations should implement its resolutions on Kashmir and urged the Muslim world to come forward in a bid to resolve the Kashmir issue with combined efforts.

Senator Saleem Mandviwalla said he met with the wife of Yasin Malik who told him many gruesome stories of Indian brutalities in her husband’s case. He said we should take friendly countries’ parliaments on board and let them know the critical situation of Muslims in India and IIOJK.

Senator Keshoo Bai expressed amazement over the criminal silence of international human rights bodies on Kashmir. She said the innocent people of the occupied valley were looking towards Pakistan, adding it was high time to make some practical efforts for them.

Senator Musadiq Malik criticised the international communities’ silence on Kashmir and Palestine issues. He, putting a question mark on the credibility of international human rights watchdogs, said when they raised their voice about the rights of women, minorities, black lives matter, animals and environment, we extended all out support but when we talked about the rights of innocent people of Kashmir and Palestine, they kept mum.