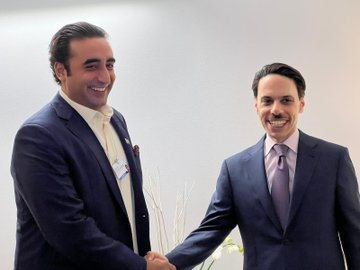 DAVOS (Switzerland): Foreign Minister Bilawal Bhutto Zardari and his Saudi counterpart Prince Faisal bin Farhan Al Saud on Wednesday expressed the resolve to deepen mutual cooperation in all fields including economy, trade and investment as well as at multilateral fora.

In a meeting held on the sidelines of the World Economic Forum (WEF) in Davos, the two foreign ministers reviewed various aspects of bilateral relations and exchanged views on regional and global issues of mutual interest.Minister of State Hina Rabbani Khar and Minister of Climate Change Sherry Rehman were also present during the meeting.

The Foreign Minister paid tribute to the Custodian of the Two Holy Mosques King Salman bin Abdulaziz and Crown Prince Mohammad bin Salman for achieving new heights of progress and development of the Kingdom under their visionary leadership.Recalling their earlier interaction in Jeddah last month, the two foreign ministers expressed satisfaction over the excellent bilateral partnership between the two countries and resolved to strengthen this partnership to mutual benefit. FM Bilawal underlined that Pakistan and Saudi Arabia had historic and deep-rooted fraternal ties that stood the test of time.

He appreciated consistent support of Saudi Arabia to Pakistan and its steadfast solidarity for the Kashmir cause. Noting the commonality of views between the two sides on international issues, the two foreign ministers agreed to jointly explore avenues for improving collaboration and coordination amongst developing countries including through the OIC platform.