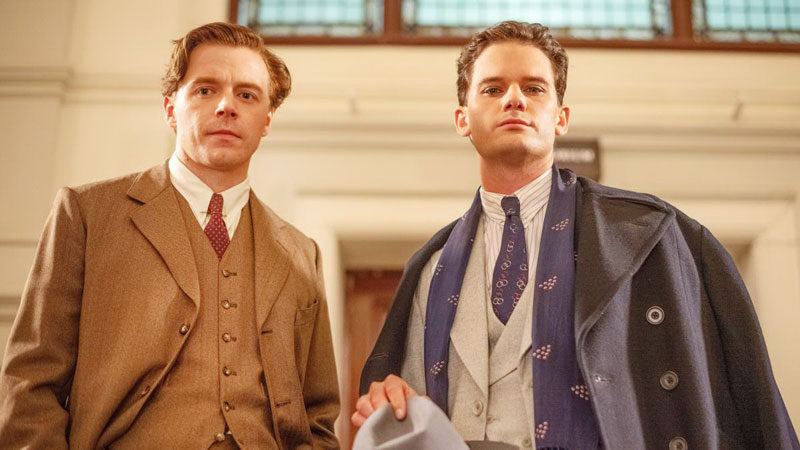 Terence Davies, the writer-director behind such modern classics as Distant Voices, Still Lives, The Long Day Closes and more recently Sunset Song, has long been one of the great poets of British cinema.

It’s perhaps unsurprising therefore that his films have occasionally focused on the lives of poets: Emily Dickinson in 2016’s A Quiet Passion, and now Siegfried Sassoon in Benediction. Davies’s portrait of Dickinson was a heartfelt paean to a creative talent who went largely unrecognised in her own lifetime. His account of Sassoon’s tribulations is more unforgiving, confronting us with a contradictory character locked in his own private hell – keenly attuned to the horrors of war, yet seemingly unable to change either himself or the world around him, whether through art or action.

Jack Lowden is perfectly cast as the younger Sassoon, a war hero who received a Military Cross in July 1916 for “conspicuous gallantry during a raid on the enemy’s trenches” on the western front. Yet Sassoon’s near-suicidal bravery covered a growing revulsion for the so-called Great War, boldly expressed in A Soldier’s Declaration in which he accused his superiors of turning “a war of defence and liberation” into one of “aggression and conquest”.

Sassoon called his anti-war protest “an act of wilful defiance of military authority”, knowing that it could lead to a court martial. Instead, thanks to privilege and connection, he was diagnosed with neurasthenia and sent to Craiglockhart war hospital near Edinburgh, where he met and mentored the younger and arguably more talented Wilfred Owen, whose poem Disabled is deployed to devastating effect in Benediction. In Davies’s hands, the comparatively fleeting relationship between Sassoon and Owen becomes a turning point for both – the latter discovering a voice that would become increasingly celebrated after his death in 1918, while the former is left in a seemingly unending cycle of grief, disappointment and loss, even when surrounded by high-society glitz and glamour. 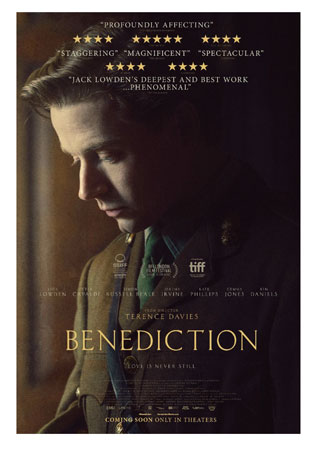 Davies’s films have always had a deeply personal edge, from the autobiographically inspired narratives of his early trilogy to his brilliantly singular vision of his home town, Liverpool, in of Time and the City. Yet in Sassoon’s story, Davies finds a narrative that cuts right to the heart of several of his personal preoccupations. From the poet’s inner struggles with his sexuality to his late-in-the-day conversion to Catholicism, Sassoon’s life offers a wealth of opportunities for Davies to turn his attentions inward, or to project his own experiences on to his subject. No wonder Lowden told me in a BFI interview that, having immersed himself in Sassoon’s diaries in preparation for Benediction, he came to realise during filming that he was effectively playing his director.

There are moments of witheringly witty cattiness, too, as the postwar years find Sassoon in the brightly brittle company of Ivor Novello and preeningly snarky socialite Stephen Tennant, caustic friends and caddish lovers who merely amplify the emptiness that increasingly engulfs Sassoon. By contrast, Kate Phillips and Gemma Jones jointly offer sympathetic portraits of Hester Gatty, marriage to whom provides him with yet another futile search for redemption. In his later years, Sassoon is played by Peter Capaldi, whose face tellingly seems set in a mask of embittered despondency, bordering upon horror.

Behind it all is an endlessly saddening search for that transformative sacrament evoked by the film’s title – alluring yet elusive. It’s a theme to which Davies has returned throughout his dazzling filmography, from his early shorts to this surprisingly accessible feature; a sense of unfulfilled longing that not even his many moments of cinematic transcendence can lay to rest.