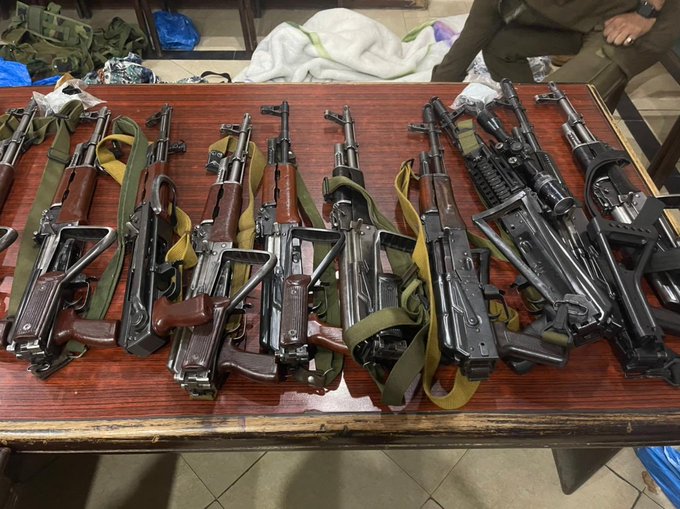 A large cache of modern weapons was recovered from the house of PTI leaders in Lahore, which police feared could have been used in the party’s long march, which began today.

The quantity of brand-new and modern weapons seized was so large that PML-N Vice-President Maryam Nawaz tweeted the news, along with photos of the seized weapons.

DIG Lahore Suhail Chaudhry said at a press conference that the PTI leaders’ modern weapons and bullets had been recovered.

He went on to say that Lahore Police intercepted the vehicles and confiscated any new or modern arms in the possession of PTI leaders that could have been used in the long march. He said the raids took place in the Nawan Kot and Multan Road areas.

96 submachine rifles (SMGs), six 223-bore guns, three pistols, 70 small arms packets, and 50 magazines were among the weapons recovered, according to the DIG.

Three vehicles were searched by the police, and weapons were recovered from one of them. The arms were allegedly transported to Lahore at 12 a.m., with the apparent purpose of using them in the long march, according to the DIG.

He claimed that a case had been filed and that people had been arrested.

He claimed that the raids were carried out in response to an incident last year in which a religio-political group opened fire on Lahore police, killing two officers.

“This time, we gathered a lot of data ahead of the long march,” he explained.

According to Suhail Chaudhry, police are on high alert, and search operations are underway to prevent any untoward incidents.

Only two high-profile leaders, Mian Mehmood-ur-Rasheed and Ejaz Chaudhary, he said, had been arrested. Weapons recovery reflects the ugliness of the long march: Maryam

In a tweet, PML-N Vice-President Maryam Nawaz stated that the recovery of weapons revealed the ugly face of the PTI’s so-called long march.