* Vishal Tweeted just hours after the film's trailer came out 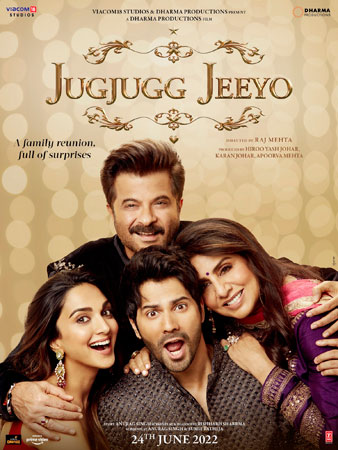 Writer Vishal a Singh has alleged that Karan Johar and his production house, Dharma Productions took his idea of a film and made it into JugJugg Jeeyo without taking him in confidence. He also claimed that he had registered his story with the Screen Writers Association of India in January 2020, a month before he pitched it to Dharma.

The trailer of JugJugg Jeeyo came out earlier this week. Directed by Raj Mehta, the film stars Anil Kapoor, Neetu Singh, Varun Dhawan and Kiara Advani. The film is slated to hit theatres on June 24 and also features Maniesh Paul and Prajakta Kohli.

Vishal tweeted just hours after the film’s trailer came out. He wrote in a series of tweets, “Had registered a story.. #BunnyRani with @swaindiaorg in January 2020. I had officially mailed @DharmaMovies in February 2020 for an opportunity to co-produce with them. I even got a reply from them. And they have taken my story.. and made #JugJuggJeeyo. Not fair @karanjohar. Screenshot of my mail to @DharmaMovies dated 17.02.2020. An official complaint will follow.”

Vishal also tweeted that he was not doing anything for the sake of publicity and wrote, “If this would have been for publicity..would have given statements to all publications that contacted me today. Chose to lay down the facts in public and let you all decide what is right and what is wrong? Sach aur sahas ho jiske man me ant me jeet usiki rahe.”

“Kahaani achchi lage agar.. baat karo.. haath milaao.. saath milke banaao? It doesn’t suit any reputed banner or for that matter.. any production house to do “Chori – Chakaari”. If it can happen to me.. it can happen to anyone in the #HindiCinema industry. #Learnings Am aware that what happened with me is happening in the #HindiCinema industry all the time. That doesn’t mean.. I should shut up? I have chosen to raise the flag coz I want this malpractice to stop. This can’t go on forever. #BunnyRani #JugJuggJeeyo.”

“Outcome of this matter will be a strong comment on the power of @swaindiaorg? If #HindiCinema industry has to flourish… @swaindiaorg has to be a strong body. Hope it’s taking note of this matter..and ideally should act suo moto. Being a member..am bound to register a complaint. If what am saying is wrong.. @DharmaMovies should act strongly against me? And if am right.. #Dharma and @karanjohar should start the #TruthAndReconciliation process. If #HindiCinema has to prosper.. serious issues can never operate in grey zone? What do you think?” he tweeted.

From the screenshots that he has shared, Vishal’s story is that of a middle-aged couple that decided to go for divorce after they marry off their children. JugJugg Jeeyo, on the other hand, shows a middle-aged couple going for divorce, even as their son wants to get a divorce from his wife. Writer Mayur Puri, who has written several TV shows and films including Mere Yaar Ki Shaadi Hai, quoted Vishal’s tweet and wrote, “Oh man! Woke up to this. Highly unfortunate. I KNOW it’s not a publicity stunt. I know Vishal well enough to assure that. I BELIEVE #Dharma is respectful of their sources and they wouldn’t violate copyright law. I HOPE this is a misunderstanding and clears out soon.”

JugJugg Jeeyo is also facing claims of plagiarism from a Pakistani singer. Abrarul Haq had alleged that his song Nach Panjaban was copied. However, T-Series, the record label for the film issued a statement clarifying that it bought the rights to the song.