* Reacting to the comment, Shahid said, 'Oh I know what you're talking about' 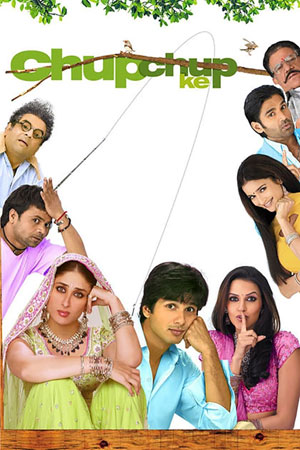 Actor Shahid Kapoor has revealed that the voice used for his character in Chup Chup Ke was dubbed and not his. Recently, while speaking with Netflix, Shahid read a comment online, “Can’t believe this is the same guy who used to do ‘Jabba Jabba’ once.” In Chup Chup Ke, Shahid essayed the role of a person who pretended to be mute. Recalling his role, the actor said that film’s director Priyadarshan had dubbed his voice without letting him know.

Reacting to the comment, Shahid said, “Oh I know what you’re talking about.” He then added, “Just FYI, in case you didn’t know, that ‘Jabba Jabba’ voice was not my voice. I also reacted to it the same way the audience did because when I saw the film and at that time, I was a newcomer, so, zyada importance nahi milti jab aap newcomer hote ho.”

He also said, “Jab maine film dekhi toh I was looking at the film, I was like, ‘Ye kiski awaz hai?’ and everyone was like, ‘Oh, he’s so funny!’ and I was like ‘Yeah but it’s not me’. I knew because I know what my voice sounds like.”

Meanwhile, Shahid was last seen in Jersey, helmed by Gowtam Tinnanuri. Mrunal Thakur and Pankaj Kapur are also a part of the film, which is the Hindi remake of the Telugu film of the same name.