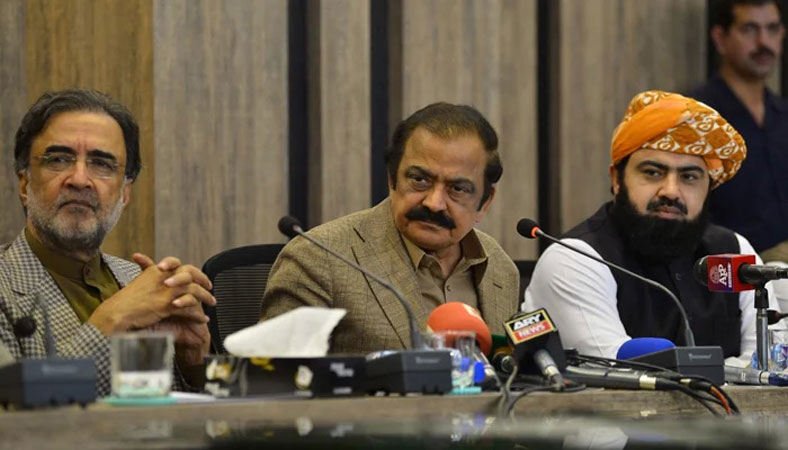 The federal cabinet has decided that the PTI should not be allowed to go ahead with its ‘undemocratic’ long march in order to avoid ‘fitna’ and ‘fasad’ in the country, said Interior Minister Rana Sanaullah on Tuesday.

Addressing a press conference in Islamabad, Sana said the participants of the long march will be stopped. He was flanked by leaders from the allied parties, including JUI-F’s Maulana Abdul Ghafoor Hyderi, PPP’s Qamar Zaman Kaira and Jamhoori Watan Party’s Shahzain Bugti.

Keeping the current political situation and PTI’s 2014 long march in view, Sana said the federal cabinet had decided that they will not allow the PTI to spread ‘fitna’ and ‘fasad’ in the name of a ‘democratic’ long march.

“The decision has been taken to stop them from spreading their agenda of manipulation and division,” Sana said, adding that the PTI leadership had moved from ‘abuses to bullets’. The minister was referring to constable Kamal Ahmad, who was gunned down last night during a police raid at a PTI leader’s house in Lahore’s Model Town. Sanaullah claimed that the PTI leadership had disappeared from their residences and gathered in Khyber Pakhtunkhwa. He claimed that they [PTI leadership] were planning to use the province’s resources and personnel to come and attack the federation, says a news report.

“They want to come as a mob that has no legal or constitutional status…this cannot be allowed.”

The interior minister said PTI Chairman Imran Khan wanted to divide the nation. Warning the PTI supporters, he said: “Don’t be misled by Imran Khan. He directed his party members during rallies to call people from other parties robbers and traitors. This is how he wants to spread chaos and disorder.”

“Everybody has the right to freedom of expression and peaceful protest; however, the PTI does not want a peaceful protest,” he said, adding that if they hadn’t called it a ‘bloody march’, the government wouldn’t have stopped them. The interior minister said protection of lives and properties of the capital’s people was the responsibility of the government and it will fulfill its duties “at all costs”.

The interior minister warned that if deemed necessary, a public holiday will be announced in Islamabad on Wednesday (today). “Imran Khan and his members must be arrested,” Sanaullah said, asserting that if given a chance, they will be taken into custody. The interior minister said: “I can assure the people that the situation will return to normal by tomorrow evening.” Regarding the news of calling the army for the security of the Red Zone, he said that Rangers and the army will be summoned if the Islamabad district administration requests. Earlier in the day, PML-N leader Attaullah Tarar announced that the government, in consensus with all its allies, had collectively decided to impose Section 144 in Punjab.

Tarar announced in a press conference that the decision was being taken in light of reports that “weapons were being collected with the intention to instigate violence and chaos in the streets”. After the imposition of law, all types of public gatherings exceeding four persons will be banned in the province. During the presser, it was stated that attempts to disrupt peace were part of a thought-out scheme to wreak havoc in the country and instigate violence.

The PML-N leader said it was clear to the government now that the PTI wished to hold a ‘bloody march’. He shared previous videos and audio recordings of Imran Khan and President Dr Arif Alvi allegedly instigating violence and celebrating the beating of a uniformed officer at the time of party’s march held in Islamabad in 2014. “Imran Khan wants to cause anarchy and destroy peace so he has dead bodies to appease his ego,” stated Tarar.

He furthered that the former premier was a “self-obsessed man” who was unconcerned with the nation’s well-being and its citizens so long as his objectives were fulfilled. Questioning Imran’s objectives behind the march, Attaullah furthered that it made “no sense” to him why the march was being organized when the country’s suffering had been caused by the PTI government’s own poor policies and incompetence. He also said that the PTI was resorting to violence because they did not have the numbers for the march. He also expressed dismay over the killing of Constable Kamal Ahmed. “What was his fault?” implored Atta as he noted that the constable was only performing his duties and alleged that private security guards had gunned him down before he could enter the premises.