Long march is against establishment, not govt 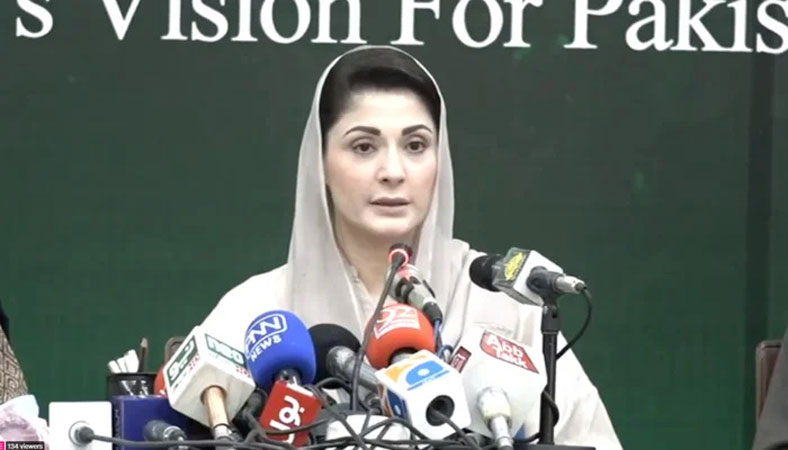 Criticizing PTI Chairman and former prime minister Imran Khan, PML-N Vice President Maryam Nawaz Tuesday said his ‘Azadi March’ was not against the government “but the establishment”. “When he says he has recognized the real faces of Mir Jafar and Mir Sadiq, then do you think he is referring to Maryam Nawaz, Nawaz Sharif, or Shehbaz Sharif? Our faces are etched on his heart. He does not sleep because our faces keep [revolving in his mind]. The threat he is issuing is not to us, but the establishment,” she said in a press conference. Maryam said Imran had also launched ‘a malicious campaign targeting the judiciary, in which abusive words were used against the judges’ as they issued the historic verdict of restoring the National Assembly. “But when the Supreme Court took a suo motu notice against Shehbaz Sharif, then you started praising them. I want to request the courts to not lay the tradition of giving verdicts in favour of the person who abuses the courts,” she said, says a news report. She asked the courts to issue decisions in favour of the people and the nation and advised the judiciary to “refrain from monitoring social media and the traditional media as well”.

Speaking further about the long march, Maryam said the government was worried about PTI’s “nefarious designs”, and it had intel about the party amassing weapons for use against the law enforcement agencies (LEAs). “They have amassed weapons, shells of tear gas, and planned other things against the law enforcement agencies. The interior ministry has intel regarding this,” Maryam said.

Maryam said it became evident that the party had amassed weapons after constable Kamal Ahmed was shot dead in Lahore during a crackdown on the PTI leaders the night before.

“I think the person responsible for the murder of the constable is Imran Khan. But the person who took the like of the constable and their mastermind – Imran Khan – will not be spared,” she added. Maryam also asked the PTI chairman to call his children to Pakistan for leading the “Azadi March”, instead of instigating Pakistan’s youth to lay their lives for him.

“A son of the soil – constable [Kamal Ahmed] – was martyred today. What is the difference between Maryam Nawaz, Hamza Shahbaz, and the sons of Imran Khan Qasim and Suleman? The only difference between them is that they are Imran Khan’s sons,” the PML-N leader said. “Since they are Imran Khan’s sons, they will live abroad, and no one will touch them. They will remain in a safe and sound environment, while the sons of the soil – who spent their entire lives serving the country – will take bullets to their chests just because a person’s desire for power does not end?” Maryam said revolution begins at home and asked Imran to tell his children to stand on the front line instead of directing his supporters to keep backing him and “suffer the beatings of the LEAs”.