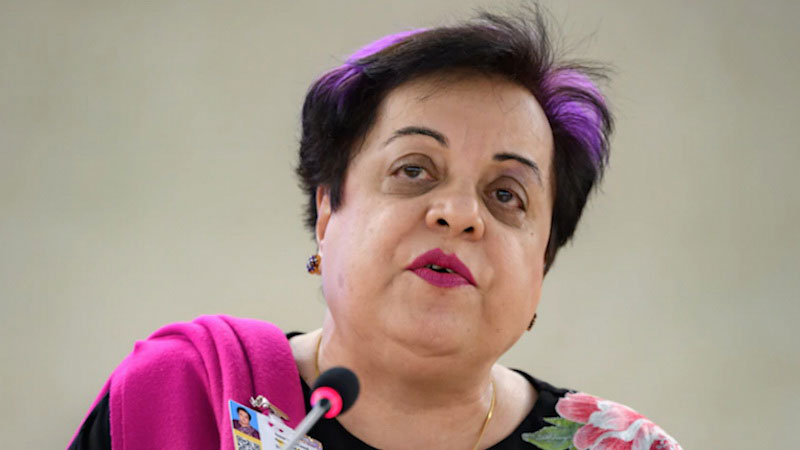 PTI leader Shireen Mazari on Tuesday claimed that as the human rights minister in the previous government she was asked to appear at the Inter-Services Intelligence (ISI) headquarters over a bill pertaining to enforced disappearances, a private TV channel reported.

The former human rights minister made the revelation while speaking to the media at the National Press Club in Islamabad where she also spoke of her recent arrest. “I have always taken a position against enforced disappearances,” she said, adding that the former government had also drafted a bill in this regard. She said that former premier Imran Khan had wanted the bill to be tabled in parliament and had asked the ministries to see whether it came under their rules of business.

“That evening I got a phone call asking me to appear at the ISI headquarters […] I went and I said that we had signed international conventions.”

She went on to say that after the bill was tabled in the National Assembly, it was referred to the interior committee where “invisible shadows” tried to change the clauses. She said that the amendments were passed by the assembly, regretting that it “disappeared” on the way to the Senate.

“My position is very clear regarding enforced disappearances,” she said, adding that Imran had also voiced his opposition from the beginning. “He always used to go to Amna Janjua’s protests.”

“We have also taken a position against this in our manifesto and will take the same position in the next one. But you know there are so many powers that stop bills [from being passed],” she said, adding that the journalist protection bill was also passed with “great difficulty”. “You don’t know how it was passed, what obstacles we faced,” she said. On a lighter note, she added that she would reveal all these details if and when she wrote a book.

This is not the first time the former minister has spoken of the disappearance of the missing persons bill. In January, she told media persons at the Ministry of Human Rights that the bill had gone missing after being sent to the Senate.

Talking about her recent arrest, the former minister asserted that it was a case of “kidnapping and disappearance”. “They dragged me from the car, put me in a white Vigo and headed towards the motorway,” she said, alleging that officials also seized her phone and wallet. Mazari said that she believed the officials were trying to take her “somewhere in Punjab”. She claimed that the officials were looking for a magistrate to complete the documentation as they did not have any grounds to arrest her. The PTI leader said that her daughter, lawyer Imaan Zainab Hazir-Mazari, was understandably upset over the events and took the name of army chief General Qamar Javed Bajwa during a press conference. “My daughter was upset as her mother had disappeared. She did a press conference where she took the name of General Bajwa and used a certain word. Now petitions and FIRs are being filed, saying she is against the national interest and that it is terrorism.”

“Seems like the establishment is currently suffering from Mazari phobia,” she added. Speaking about the corruption case against her, she termed it “political victimisation”, saying she was never informed of the charges or asked to provide a clarification and that her name only surfaced during the investigation process.

She said that one of her acquaintances, a former official of Punjab’s Anti-Corruption Establishment (ACE), had advised her to “go easy” on the establishment. She quoted the official as saying that sham cases were being created against her. “He said he stopped them when he was in the ACE, saying they were false and should not be pursued. He then received a phone call telling him to not get involved …” She also questioned why officials seized her phone following her arrest. “The establishment would want information but the ACE would have not gotten any information from my phone.”