* Breaking out in a warm smile as she was pictured on Monday, wore a fuchsia coat paired with white
gloves as she was seen on the adapted vehicle 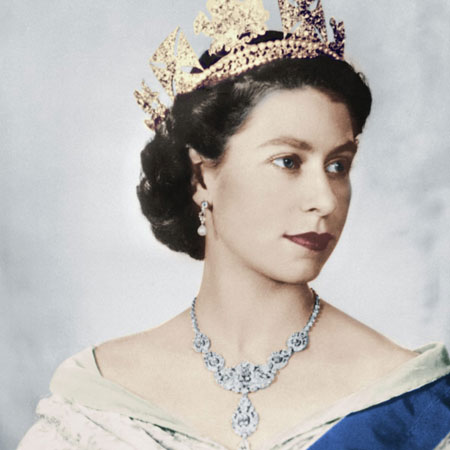 The Queen arrived at the Chelsea Flower Show in a luxury buggy for a royal preview ahead of tomorrow’s official opening, Buckingham Palace has confirmed after a last-minute decision was made for her to attend.

The head of state has gone to the world-famous event in London run by the Royal Horticultural Society, of which she is a patron, more than 50 times in her 70-year reign – but recent ill health had made her presence uncertain.

But breaking out in a warm smile as she was pictured on Monday, the monarch, 96, who has battled mobility issues that caused her to miss recent royal events such as the State Opening of Parliament, wore a fuchsia coat paired with white gloves as she was seen on the adapted vehicle.

It is believed to be the first public occasion that Her Majesty has opted for her new £62,000 four-seater vehicle dubbed the ‘Rolls Royce’ of premium golf carts.

Built by Danish manufacturer Daria, the speedy battery-fuelled buggy has a range of 50 miles before it needs charging.

The Queen can recline in her cream-leather seat and have a quick bite to eat or something to drink from the on-board mini fridge. It also features a 10.1inch tablet-style screen next to the steering wheel, offering maps and weather updates, as well as ‘weather enclosure’ doors.

A Buckingham Palace spokeswoman said: ‘Adjustments have been made for the Queen’s comfort.’ She arrived at around 5.35pm and will be shown around 10 gardens using the vehicle.

It marks the first time in nearly a decade that the monarch is believed to have used a buggy at an official engagement.

The Queen was seen in a golf buggy nine years ago in 2013 during the Coronation Festival in the gardens of Buckingham Palace. She also used one during a tour to Australia in 2011, when she visited Government House in Canberra.

Buckingham Palace had earlier confirmed a final decision was taken that she will attend the event at Royal Hospital Chelsea despite her mobility issues, having said last Thursday that she still hoped to visit the event.

The Earl and Countess of Wessex, Princess Beatrice, the Duke and Duchess of Gloucester, the Duke of Kent, Prince and Princess Michael of Kent and Princess Alexandra were already confirmed attendees for this afternoon.

Joe Little, of Majesty magazine, said of the development: ‘It’s an extremely practical arrangement that will allow the Queen to take part in as many engagements as she is able to do.’

The Queen, who confessed during an audience in February to not being able to move, is just 10 days away from the start of her high profile Jubilee celebrations.

Earlier, a royal source told MailOnline that it was still the Queen’s ‘intention’ to attend and she was ‘on her way to London’, adding that ‘it was ‘more likely than not’ but ‘these things are being played day by day and hour by hour’.

Sue Biggs, director general of the Royal Horticultural Society, said this morning that the Queen is ‘the most special person to us’ and that there were tributes to her long reign ‘everywhere you go’ around the show.

It is believed to be the first public occasion that Her Majesty has opted for her new £62,000 four-seater vehicle dubbed the ‘Rolls Royce’ of premium golf carts

She told BBC Radio 4’s Today programme this morning: ‘There is a whole display of different signatures. So we had a signature, which is a painting just for one member of the Royal Family, of their favourite flowers, and so we have that at the show today. And the Queen is the only queen in history who has had three signatures painted.

‘So we hope she’s going to be well enough to be able to come and see us today, and we look forward to seeing her and showing her the signature later on this afternoon, which will be great.

‘But you can’t walk through this show – whether you’re at the amazing 39 gardens or at the 80 exhibits in the Great Pavilion – of seeing everybody’s love for the Queen and tribute to the Queen on this very, very special occasion.’

She said other tributes included one by renowned florist Simon Lycett, who has created many arrangements for the Royal Family and has designed a special silhouette of the Queen in the official Platinum Jubilee shade of purple.

It will be covered on both sides with an assortment of native British-grown tree branches with connecting inner shelves arranged with 70 terracotta pots, hand-made in Warwickshire, and planted with Lily of the Valley, one of the Queen’s favourite plants which featured in her Coronation bouquet.

Lycett told the Daily Telegraph it would be ‘utterly overwhelming and magical’ if the Queen saw his tribute in person, adding: ‘It would be totally special, and a delicious cherry on top of what is already a rather gorgeous cake.’

Her Majesty was unable to attend the State Opening of Parliament on May 10. However, she was in good enough health to attend the Royal Windsor Horse Show on May 13 and then on May 17 opened the new London railway line, the ‘Elizabeth line’, which has been named in her honour and will open to the public tomorrow.

The Queen’s surprise appearance to open the line at Paddington station, which will begin services to and from Abbey Wood tomorrow, boosted hopes she will be able to join festivities for the Jubilee bank holiday weekend.

Visitors will also be transported to one of the head of state’s favourite places in honour of her 70 years on the throne, with one setting inspired by the colours of the Balmoral countryside.

An installation by floral designers Veevers Carter will feature a canopy of flowers including fresh Delphiniums, emulating the colours and planting of the Scottish landscape near the Royal Family’s Balmoral Castle estate in Aberdeenshire.

The area, Natural Perspectives, will offer visitors an ‘an ambient soundscape’ and visual projections of wildlife, leading to a large-scale portrait of the Queen made from dried pressed flowers that have been collected and re-used from the designers’ previous events.

In the show’s Great Pavilion, the monument will be surrounded by a photography exhibition of the Queen visiting the show throughout her reign.

With a calm and serene environment, it will be set against a colour palette of white, green, purple and blue plants to reflect the tones found in natural woodlands.

An archway of royal emblems reminiscent of a countryside meadow by Lucy Vail Floristry will decorate the Bullring Gate.

It will include three wicker crowns covered in sweet peas and columns abundant with foxgloves, geraniums and irises.

Members of the royal family traditionally tour the gardens at Chelsea. Among the displays will be The Queen’s Platinum Jubilee Garden, which will feature laser-cut steel silhouettes of the monarch, surrounded by 70 planted terracotta pots, representing each year of her reign.

The RAF Benevolent Fund Garden will hark back to the Battle of Britain in celebration of the support the charity has provided to RAF personnel, veterans and their families for over 100 years.

The royals will also be shown The Mind Garden, which provides a colourful place for people to connect and open up. It will later be transported to a local Mind organisation, providing eco-therapy for those with mental health problems.

The gardening extravaganza is returning to its May dates for the first time since the pandemic. In 2021 it was held in September, a first for the show and in 2020 it was cancelled.

The Queen has been the RHS’s royal patron since 1952 and was a regular visitor to the garden show with her parents as a child.

Helena Pettit, director of RHS Gardens and Shows: ‘This year’s RHS Chelsea is going to be particularly special as we celebrate this historic anniversary for Her Majesty and as the show returns in May following the pandemic.

‘These imaginative floral tributes are a fitting and joyful representation of a truly unique monarch, and we hope visitors will enjoy seeing them at the show in the lead up to the Platinum Jubilee celebrations.’

The Queen has faced multiple health issues in recent months, with the first scare beginning in October after she spent a night in hospital, with doctors ordering her to rest.

A two-day visit to Northern Ireland and the COP26 Climate Change Summit were also skipped following the initial hospital visit.

She also had to pull out of the Remembrance Sunday service less than two hours before it went ahead due to a sprained back.

She also missed a Commonwealth Day in March as a precaution after testing positive for Covid-19 in February.