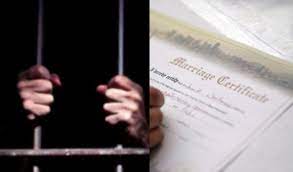 According to a spokesman for the ACE that complainant Gul Sher s/o Muhammad Ashraf, resident of Sargodha, submitted an application to the Regional director office in which he stated that Rana Khalid Mehmood with the connivance of sectary Union council harnoli Muhammad Umar, Nikkah khawan Hafiz Muhammad Nasrullah and others had prepared a fake marriage certificate. On which, the ACE regional director handed over the investigation of a case to the ACE Khushab.

During the investigation, it was proved that the accused had prepared a fake marriage certificate.

Circle officer ACE Mianwali Adnan Haider conducted a raid and arrested main accused Khalid Mehmood while raids were being carried out to arrest other accused.