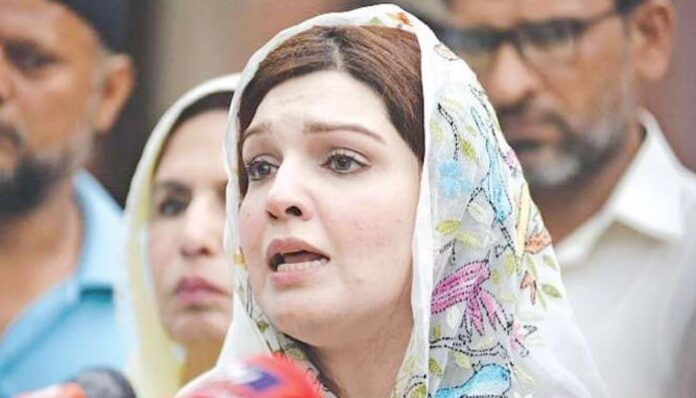 All Hurriyat leadership in Indian occupied Kashmir is being deliberately eliminated, she feared while speaking to PTV news channel.

Yasin Malik is being judicially assassinated, and the world and human rights international organizations should urgently help in the release of Yasin Malik, she demanded.

She explained that Narendra Modi-led fascist Indian government had arrested thousands of Kashmiris including Hurriyat leaders and activists before and after its illegal move of repealing the special status of IIOJK on August 05, 2019 and lodged them in different jails of occupied Kashmir and India.

She said that Yasin Malik was a political prisoner and India was taking unconstitutional steps to illegally remove the leaders of Kashmir freedom movement, adding, the international community should put more pressure on India to immediately release Yasin Malik from all “baseless” charges against him.

She also lamented that the brutal treatment meted out to Yasin Malik despite his chronic multiple ailments which had resulted in a steep decline of his poor health.

She said Indian’s all drama and films are based on propaganda against Muslims which is being exposed on international level, adding, Over 1.6 million Indians got domicile in IIOJK during the pandemic of coronavirus.

Mashal Malik said that she wants to save her husband, who is in Tihar jail, adding, after Syed Ali Gilani and Muhammad Ashraf Sehrai, India under Modi has prepared to execute another frontline Hurriyat leader Muhammad Yasin Malik in jail.

She also called on the international community to play its role in giving Kashmiris the right to self-determination in accordance with the UN resolutions, and called for an end to Indian atrocities and human rights abuses in Indian illegally occupied Jammu and Kashmir.