* Zain intelligently creates the character of Sharif Barkati, who was born into a lower-middle class household, 'surrounded by bands of broken houses bordering sewerage canals' 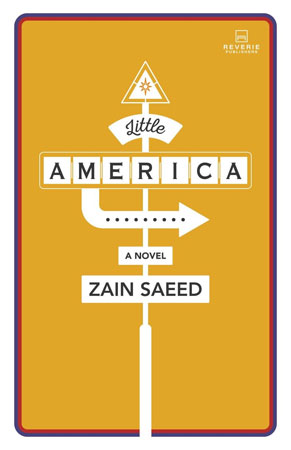 Exploring the world within the mind of the character and presenting it for the readers to enjoy is a task that most writers do not fulfil with diligence. It takes effort and resilience to carve one sentence after the other to take the readers to the climax. The characters make their way into the readers’ conscious while treading through their challenges – which are a figment of the authors’ imagination. We experience the same imagination and storytelling in Zain Saeed’s Little America. A tale about the common man’s wild ambitions and desires – for we too have pondered over living a life of luxury – filled with risk. The protagonist, Sharif Barkati is obsessed with America – an attribute we can relate to ourselves. He wants to create a space in Karachi that is “away from the conservative eyes of Pakistani society.”

He eventually creates such a place – heaven as you may call it – on the city’s coast where all options for pleasure are available. He did have support from his friend Afzal and TJ, a rich Pakistani-American. While Barkati did achieve his dream, he eventually did go behind bars. Little America is his story.

Zain intelligently creates the character of Sharif Barkati, who was born into a lower-middle class household, “surrounded by bands of broken houses bordering sewerage canals in Karachi’s Mahmoodabad. This perhaps will connect Barkati’s thoughts and aspirations to the readers for it is always interesting to read a character’s journey as it reaches to the top while not having enough resources.

The character of Barkati may be seen as a part of our consciousness. We too want to get rid of the red tapes of limitations preventing the middle-class population who want to bask in the glory, charm and splendour of money, fame and all that comes with it. After being exposed to the American lifestyle and the American Dream, we carve a parallel reality to achieve our dreams – of partying, earning money as if there is no tomorrow, and making the rules we see fit. The reality hits us when we least expect it. We dwindle to the level where we are supposed to stand – within the parameters of the system, its rules, and others’ expectations. Barkati, too, faced such a reality check when he was enjoying life the American way in Karachi before it ended, faded, and was sentenced to death. The readers will have to read the novel to know how Barkati built the empire and how it crumbled.

While what Barkati does was illegal, he did show us one secret to success – to create a network of contacts wherever you go that will help you complete your goals – one objective at a time. As Barkati is sharing his life story, Zain writes the novel in the first perspective, giving the readers a front row seat to experience the action. He also creates a world that we may never see in Karachi. This world was described by TJ during a presentation as,” Imagine a seaside heaven. I’ve long dreamed of walking on Sea View in a bathing suit, lying back on a chaise longue, sipping a margarita. I have dreamed of a seaside smell that is not rotten. I have dreamed of wet sand without shards of glass…those candy wrappers and forgotten socks.”