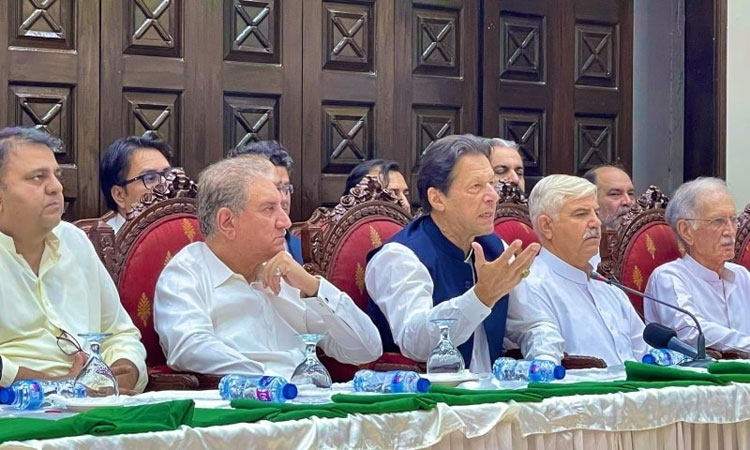 Former prime minister and PTI Chairman Imran Khan Sunday announced that their long march to Islamabad against the ‘imported government’ will start on May 25.

He announced the decision after chairing the party’s core committee meeting in Peshawar earlier in the day.

“I invite the entire nation. People belonging to all walks of life, including labourers, ex-service men and others, should participate in the long march for real freedom of the country,” he said while speaking to reporters. “I will meet you on May 25 on the Srinagar Highway at 3pm,” he remarked.

He demanded of the coalition government to immediately call early elections and dissolve assemblies. Imran Khan said his party would stay in Islamabad until the date for new general election is announced. “We are ready to sacrifice our lives for our freedom, we will not accept the ‘imported government’ under any circumstances.”

“I am also asking the army to remain ‘neutral’ as they have said earlier that they are neutral,” he commented.

He also warned the authorities against creating hurdles in the long marchers’ way, saying that PTI will take legal action if this happens. Before announcing the date of long march at the presser, Imran explained in detail the reason for initiating the anti-government movement. He said the coalition government was the result of a ‘foreign conspiracy’ which he claimed was hatched against Pakistan to influence its foreign policy.

“The United States colluded with corrupt individuals for a regime change in Pakistan… I tried my best to stop this conspiracy from happening but unfortunately we could not foil their attempt,” he said.

Reiterating his allegations, he said a day after US Under Secretary Donald Lu threatened Pakistan with consequences, the no-trust motion was filed against his government.

“My government was toppled at a time when all sectors of the country including economy and exports among others were showing an upward trajectory,” he added.

Khan said those who were involved in the alleged conspiracy against his government sent message to the US that his visit to Russia was his government’s unilateral decision.

“I visited Russia in consultation with all stakeholders including the foreign ministry and the military establishment.”

Taking a jibe at the incumbent rulers, the deposed premier said they lacked planning and capability to steer the country out of prevailing crises. “The current government is asking the National Security Committee (NSC) to take the responsibility for the increase in fuel prices as they want to put all this burden on the military.”

The former prime minister said that the PTI had always been a peaceful party and had “never instigated violence or chaos. “This isn’t politics, but this is jihad (holy war).

The ex-premier criticised the current government and said that while “it was claimed that the leaders of the coalition parties were very experienced people” in terms of their governance skills, it turned out that they were “only experienced in corruption, hiding corruption cases, and seeking revenge against their opponents.” He continued: “Their experience is reflected in the way the rupee is depreciating, the stock market is plummeting, and inflation is skyrocketing.”

He said that the government had “no plans, no roadmaps, and was unable to make decisions out of fear” so much so that it had to seek the assistance of the National Security Council (NSC) to determine the prices of petroleum products.

“The government is putting forward such demands so that the Pakistan Army will eventually have to bear the burden of the tough decisions so that it could get off scot-free.

Khan, referring to PML-N Supremo Nawaz Sharif, went on to say that a “convict, fugitive” was making decisions about Pakistan while sitting in London and said that 60% of the cabinet was roaming free on bails.