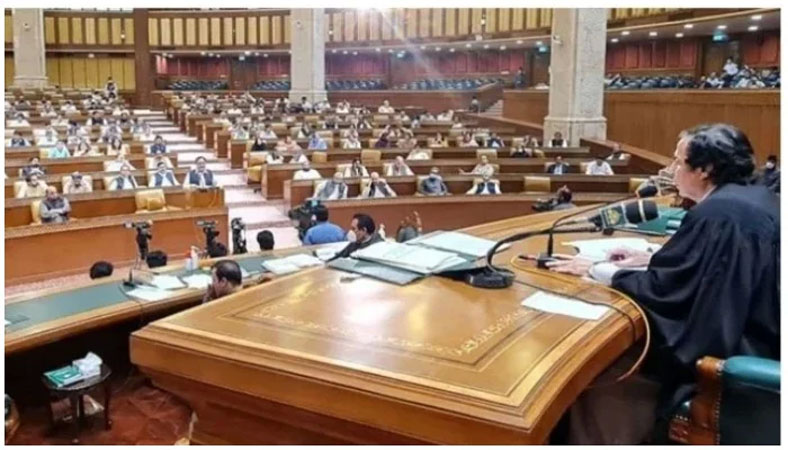 The no-confidence motion against the Punjab Assembly Speaker Pervaiz Elahi was Sunday dismissed after PML-N MPA Sami Ullah Khan, who had filed the no-trust motion against Elahi, failed to show up.

The session – with the Panel of Chairmen Waseem Khan Badozai in the chair – was adjourned within six minutes despite it starting after a delay of two hours.

As the assembly’s proceedings began, the speaker called out the name of PML-N MPA Sami Ullah Khan but he was absent. Owing to his absence, Badozai disposed of the motion and deferred the session.

Before the session, MPAs reached the assembly to attend the meeting previously scheduled to begin at 12:30pm. However, the session couldn’t be started on time as the lawmakers were stopped from entering the premises.

Security had been tightened around the Assembly in Lahore Sunday morning. PA Speaker Pervaiz Elahi called the session while cancelling the previous date of the assembly session scheduled for May 30, says a news report.

The political situation intensified Sunday morning with the arrest of the PA Director-General for Parliamentary Affairs Rai Mumtaz after the announcement of an emergency session. The police were directed to stay on high alert and a heavy police force was deputed in the surroundings of the provincial assembly.

Police also barricaded different spots on the Mall, including the routes leading from the CM House and Aiwan-e-Iqbal to the PA.

Earlier, the administration had closed the doors of the PA, while barbed wires were placed in front of the assembly building. Punjab Assembly staff said that even they were not allowed to enter the building. Due to strict arrangements, even the security team of Punjab Chief Minister Hamza Shahbaz wasn’t allowed to enter the Assembly. Meanwhile, PML-N decided to send only 15 to 20 MPAs inside the PA in the first phase as soon as the gates opened.

PML-N members called a meeting Sunday to decide the future strategy in which leader Uzma Bukhari asked PML-N members as to why they did not reach the House on time.

PML-N leader Ata Tarar said that MPAs and media were not allowed to enter the provincial assembly.

“Speaker Pervaiz Elahi has brought goons from Gujrat,” he claimed, adding that “some people” were brought to the House yesterday night. “You [Pervaiz Elahi] are disrespecting the House,” the PML-N leader added. He said they would enter the assembly accompanied by media persons.

He maintained that the government had submitted a no-confidence motion against the speaker as per the Constitution and vowed to challenge the speaker’s “illegal actions” in court.

Responding to a question, the PML-N leader said that the ECP has not de-notified the 25 defiant lawmakers of the House so far. The PA session was due to begin at 12:30pm with the no-confidence motion against the speaker and deputy speaker on the agenda. However, the session couldn’t be started.

Punjab police arrested Punjab Assembly Director-General for Parliamentary Affairs Rai Mumtaz in the wee hours of Sunday ahead of the PA session.

Mumtaz’s family alleged that the police raided their house and shifted him to an unknown location.

The Punjab Assembly spokesperson confirmed reports of Mumtaz’s detention, saying that the police leapt the walls of the DG’s house. He added that the houses of PA Secretary Muhammad Khan Bhatti and Coordination Secretary Inayatullah were also raided.

The spokesperson further stated that they also have video evidence of the raids on assembly officials’ residences and also accused police of vandalism during the raids.

PPP Parliamentary Leader Syed Hassan Murtaza told reporters that only PTI lawmakers were being allowed to enter the assembly. He alleged that such methods were being used to ensure that a “mishap” could occur so that there would be grounds to disqualify lawmakers.

On the other hand, Elahi in a conversation with reporters, said the “father-son” duo of Shehbaz and Hamza Shehbaz had shut the gates when asked who was responsible for the obstacles.

He said it was now evident to the media that they (the government) “have made a police gate”.

“The truth is they have seen that they don’t have the numbers. We have more people. Their lotas (turncoats) have been de-seated … There is no one that can stop legislation.”

He also warned that those police officials who obstruct proceedings were risking Article 6 – treason – cases.

Earlier in the day, Elahi spoke of the enhanced security presence, and said: “Let’s see who prevents the elected members from entering the assembly. “We will fight against government fascism. No one can stop elected representatives from entering the assembly.” Former Punjab governor Omar Sarfraz Cheema also took to Twitter and requested the “heads of the law enforcement agencies and constitutional institutions” to take notice of the situation in Punjab.

“How long can a province of 120 million be bullied by this father-son [duo] and police,” he said, adding that the public should not be forced to take to the streets to “free the province”.