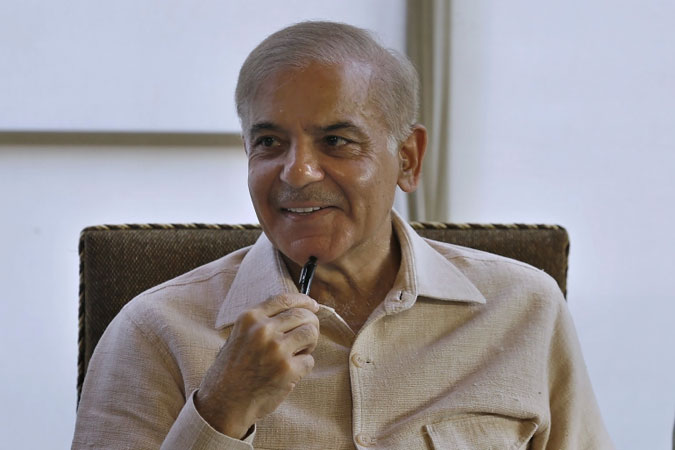 Prime Minister Shehbaz Sharif Sunday said the nation will not forgive former prime minister and PTI Chairman Imran Khan if a civil war broke out in the wake of his party’s ‘Azadi March’ on Islamabad.

“Imran Niazi wants civil war but let me tell you the nation will not forgive you… it will be your collar and people’s hand,” he said while addressing the media at Lahore’s Pakistan Kidney and Liver Institute (PKLI).

Shehbaz said Imran Khan used National Accountability Bureau (NAB) to victimize his political opponents, adding that he will have to pay for all his actions.

“Imran Niazi was only focused on putting people in prison. He used to dictate NAB and directed Shahzad Akbar to make Shehbaz Sharif sleep on the floor in prison. He has no sympathy for humanity and cannot address the problems of the people,” he added.

The prime minister said NAB was unable to prove a single pennyworth corruption against him, adding that he wished the PTI government had paid more attention to the miseries of people rather than seeking ‘revenge’.

“They did not have time for taking decisions that would bring prosperity for the people as they were so busy [seeking revenge]. PTI promised five million houses but could not even build a single one. Rather than providing jobs, PTI snatched jobs from many.”

Shehbaz said that despite being in power for just a few weeks, his government was able to bring down the prices of wheat and sugar, says a news report. “Three years of this hospital were wasted just because of the stubbornness of Imran Niazi… Imran Niazi, this nation will not forgive you. The people who could not be treated will curse you as many lost their loved ones because they could not get treated,” he added.

Talking about PKLI, Shehbaz announced that 50 per cent of patients will be treated free of cost. “These will be white-collar people who cannot afford expensive treatment abroad and will be given preference,” he added.

He further said that the nursing university will be completed within a year.

“It should have been completed a lot earlier but nothing was done for it during the last three years,” he further said. Meanwhile, Prime Minister Shehbaz Sharif Sunday congratulated Chinese President Xi Jinping, the governments and the peoples of the two countries on the 71st anniversary of the establishment of Pakistan-China diplomatic relations.

In his message on the occasion, he said China and Pakistan are the names of two brothers.

The prime minister said the leadership and peoples of the two countries have nurtured this evergreen tree of friendship over the past 71 years, Radio Pakistan reported.

He paid rich tributes to all the leaders of both the countries, who made efforts to transform this unmatched friendship into Cooperative Strategic Partnership and the Iron Brothers relationship. He said no untoward incident, storm in global politics or jealousy could make any dent to this iron bond (Pak-China Relationship).

He said our Chinese brothers and sisters were recently attacked outside Karachi University. We salute to these and all others who sacrificed their lives for Pak-China friendship, and express grief and sorrow with their families. The Prime Minister expressed commitment to bring the culprits of the Karachi incident to justice.

Shehbaz Sharif said CPEC provides a strong foundation to economic cooperation, poverty alleviation and connectivity not only for the two countries but for other countries of the region as well. This project is a symbol and guarantee of bright future of the next generations. He expressed resolve to take this economic bond, cooperation and mutual trust of two iron brothers to new heights.