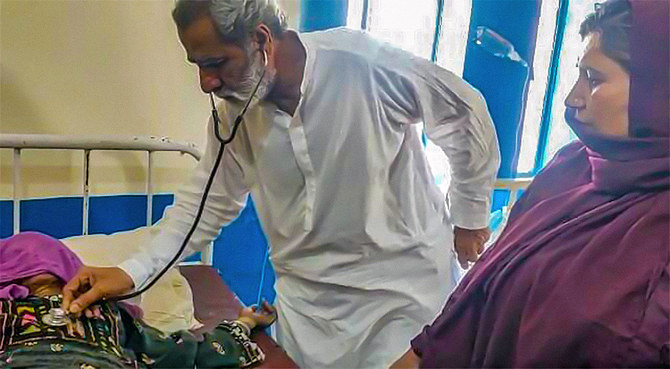 A report submitted by the provincial government to the Prime Minister said that a total of 3,615 patients had been fully recovered and only three patients were currently under treatment. According to the report, the disease spread after people used the water from a natural spring of Pathar Nullah in Pir Koh, Dera Bugti, the PM Office Media Wing said in a press on Sunday.

Measures were taken to contain water use from the same spot and after water chlorination, the place was opened for usage. Under the Prime Minister’s direction, funds were provided by the provincial government for the provision of medicines. Two medical camps were set up in Pir Koh area on emergency basis, besides establishing a 20-bed hospital facility at respective Basic Health Unit (BHU) by deputing 24 doctors and 32 paramedical staff in Pir Koh area.

The report further said that laboratories were also set up in the area whereas teams were constituted to launch door to door awareness campaign. The presence of local administration was also ensured. During the drive, Minister for Narcotics Control Nawabzada Shahzain Bugti, Chief Secretary, Provincial Health Secretary, and other relevant authorities were also present to supervise the efforts. The Country Director of WHO also visited Dera Bugti.

For the provision of safe drinking water, Rs 100 million were immediately released and PDMA provided tanks to store 4,000 gallons of clean water. While under the prime Minister’s special direction, steps for completion of water supply schemes in Pir Koh Zinkoh were prioritized.

The affected people were also provided with the edibles. The WHO had also provided a 12-bed hospital besides, an ambulance and medicines to control the endemic. The report further indicated that short and long term planning had been made to cope with such incidents in the future.