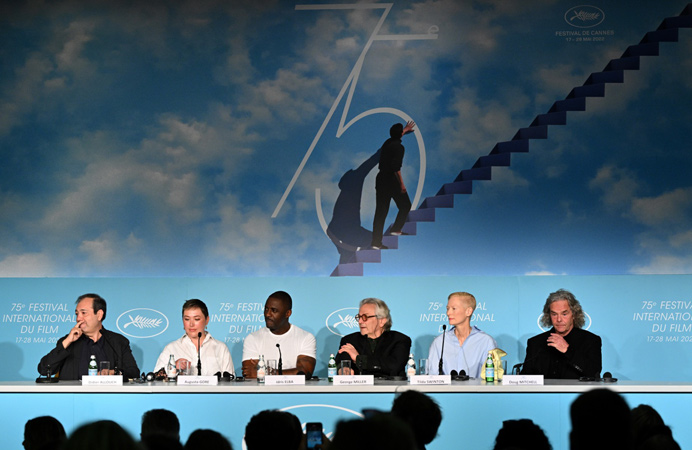 Swinton plays an academic who releases a djinn from a bottle she finds in an Istanbul market, who offers her three wishes.

The djinn tells her how he found himself trapped – throwing the audience back through a series of fabulous folktales reminiscent of “The Arabian Nights” – though seeded with doubts about what is true and what is deception. Speaking at Cannes, Swinton said it was fitting for a film “about having a variety of angles”.

“The thing that’s dangerous about stories is when you only have one story,” she told a press conference. “It’s so clear now, particularly in the last few months that… when people only hear one story, things go down the tubes fast,” she said, in an apparent reference to Russia’s invasion of Ukraine.

On a lighter note, the film team faced the inevitable question of what three wishes they would make if they had the chance. “I wish I had a better answer for that very question,” Elba said with a chuckle. “My second wish is that the audience takes from this film that we learn from stories and that this is quite an unconventional telling of a story.

“And my third wish would be for an electric Ferrari,” he added, to laughs from the reporters.

Miller is the lauded Australian director behind such varied films as “Mad Max”, “Babe” and “Happy Feet”.

Given that his new film is a celebration of centuries-old myths, he was asked for his thoughts on Hollywood’s current obsession with superhero franchises and whether they would endure.

“It’s obvious that the Marvel and DC Universe are basically the vestiges of the Greek, Norse and Roman mythologies,” Miller said. “They’re echoes of the past but adjusted to have meaning to us and it’s no accident that they’re so popular and that the people making them are sincere,” he added. There was praise in the early reviews for “Three Thousand Years of Longing”, with Deadline finding Swinton and Elba “nothing short of marvellous”, though The Hollywood Reporter found it “ponderous and heavy”. The Guardian landed somewhere in the middle, saying the 77-year-old Miller had “earned the right to make whatever he wants”.

“It’s so defiantly out of step with fashion that there’s finally something faintly glorious about it,” the newspaper added.