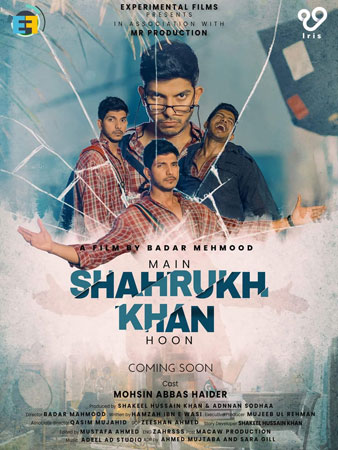 Bollywood superstar Shah Rukh Khan’s popularity transcends borders. The 56-year-old actor has fans not just in India, but across the entire subcontinent. Shah Rukh Khan even romanced Pakistani actor Mahira Khan in the 2017 crime drama, Raees. And now a film, with King Khan’s name in the title, is being made in Pakistan.

Recently, Pakistani actor Mohsin Abbas Haider confirmed that he will star in a movie titled, Main Shahrukh Khan Hoon. The film is about an aspiring actor, a die-hard fan of Shah Rukh Khan. Mohsin shared the poster of his film on Monday on his Instagram and said that the film was “an actor’s dream project”.

“Finally sharing the poster of one of my favourite projects as an actor, Main Shahrukh Khan Hoon. I played five different characters in this short film,” Mohsin wrote in the caption.

Earlier, there were reports that Main Shahrukh Khan Hoon is the biopic of King Khan. But in a conversation with a publication, Mohsin Abbas Haider clarified that the film was not a biopic of a Bollywood superstar. “This is just a character. We believe that the generations that have come after Shah Rukh Khan, can’t act without a little essence of Shah Rukh Khan – this is a very strong belief of mine and you can very easily spot it in every actor. So it’s not just about Shah Rukh Khan, it’s about five different characters,” Haider was quoted as saying. Directed by Badar Mehmood, Main Shahrukh Khan Hoon will soon release on an OTT platform. The film is bankrolled by Shakeel Hussain and Adnan Sodhaa. Mohsin Abbas Haider is an experienced actor and has starred in the hit Pakistani movie, Na Maloom Afrad. He has also featured in the Pakistani serial, Lashkara.