Imran Khan to give call for march on Islamabad today 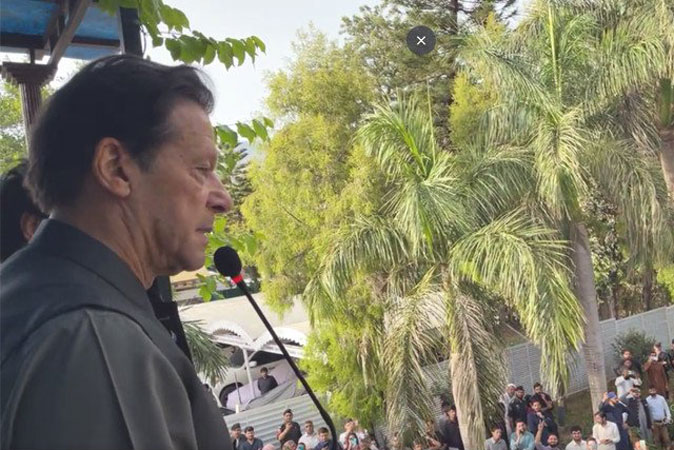 PTI Chairman Imran Khan Thursday announced that he would give the call for a long march on Islamabad on Friday (today).

Addressing a group of young people at the Khyber Pakhtunkhwa House in Islamabad, Imran said he would announce his call for the much-awaited long march to Islamabad during his address in Multan.

“We do not want an imported government but freedom via elections,” Imran Khan said. “A sea of people would not leave Islamabad unless Shehbaz Sharif-led government announces the date of fresh elections”.

“We will be giving this call to all Pakistanis, not just PTI supporters, as Pakistan has been insulted after the country’s most corrupt people were imposed on us by a foreign power,” Khan said in a video statement.

Former prime minister Khan was ousted from power on April 10 after the National Assembly voted him out through a no-confidence motion – making him the first premier to be voted out through the move.

In his message, the ex-prime minister had said the preparations for the long march would begin on the eve of Eidul Fitr and urged the youth to come out on the streets with PTI’s flags in their hands. Since then, the PTI has been holding power shows across the country to ramp up the pressure on the government to hold fresh elections. “We don’t want independence where we say that we’re independent but we are dictated by foreign countries that you cannot buy oil and wheat from Russia,” he added.

Imran further said that when a nation is fully independent, it makes all the decisions for the betterment of its people. “Their rulers do not sacrifice their people for the wishes of others. I will need your passion and courage for this long march. Our destination is near.”