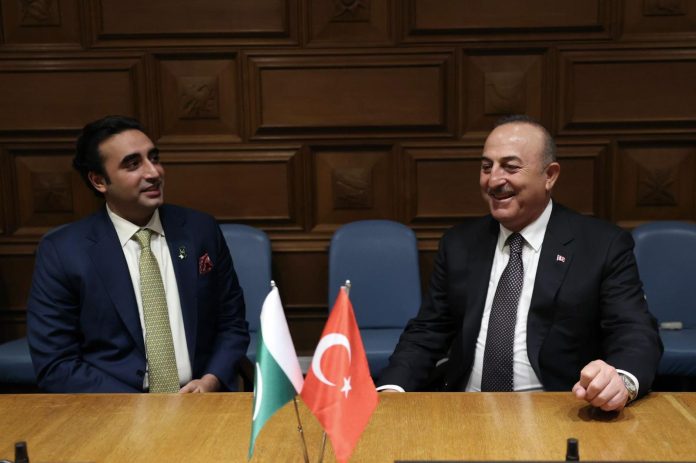 NEW YORK: Foreign Minister Bilawal Bhutto Zardari in a meeting with his Turkish counterpart Mevlüt Çavusoglu in New York have expressed commitment to work together to enhance economic cooperation and unleash the full potential of Pak-Turk trade relations.

This was agreed upon on the sidelines of the Ministerial meeting on ‘Global Food Security Call to Action’ held in New York, Foreign Office said Thursday.

Both sides agreed to remain in close contact to maintain the upward trajectory and add momentum to the friendly ties between Pakistan and Turkey.

He noted that in November this year, the 75th anniversary of the establishment of diplomatic relations between Pakistan and Turkey would be celebrated in a befitting manner.

FM Bilawal thanked the Turkish Government for its steadfast support and principled position on the Jammu and Kashmir dispute. He also briefed his counterpart on the so-called “Delimitation Commission” and India’s illegal steps in IIOJK.

Foreign Minister Bilawal appreciated Turkey’s role and contributions towards the promotion of peace and stability in the region.

He appreciated Turkey’s support to address the humanitarian crisis in Afghanistan.