* Ex-PM says SC not only got rid of 'some people', but also embarrassed them
* Biggest thieves and mafia leaders ganged up against him but nation stood up against them
* Zardari happy that all abuses are being hurled at Shehbaz 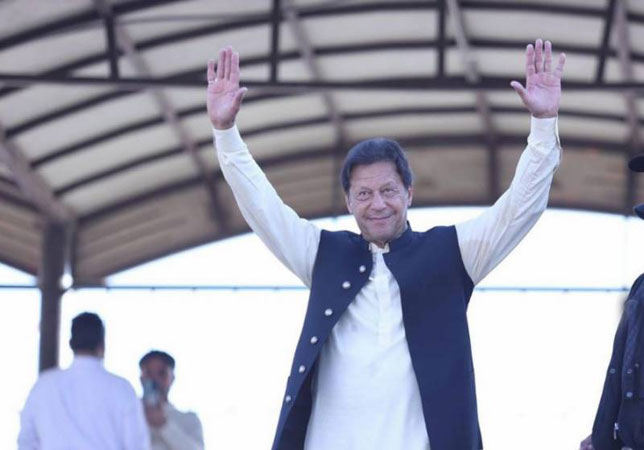 Ousted prime minister and PTI Chairman Imran Khan Wednesday claimed that the families of police and military personnel will also join his march on Islamabad.

Addressing a rally in Gujranwala, he said, “I also know that the family of my army will also be coming with us, God willing.”

He once again hailed the Supreme Court’s decision a day earlier observing that the votes of the dissident lawmakers could not be counted. “I want to pay tribute to Supreme Court because it has gotten rid of some people. The Supreme Court not only got rid of them, but also embarrassed them,” he said.

He said Punjab Chief Minister Hamza Shehbaz might no longer be in his position after the apex court’s decision and urged his supporters to join his long march because now the Punjab Police will not create any trouble for them.

“No one was thinking when I will be removed from power, people will take to the streets. I want you to come to Islamabad for two reasons. One is because of the US conspiracy. Second, to get rid of these criminals who have been imposed upon us.”

Imran said Pakistan’s industries flourished under his government’s tenure. “The entire world was under pandemic. India’s economy was in ruin. During that time we saved our people from coronavirus as well as poverty. We collected the most tax in the history of Pakistan. We reduced the prices of petrol and diesel,” he added.

Imran said his government was removed from power because Pakistan was achieving economic prosperity.

“We were on the rise but these dacoits brought the government down with the help of US,” he added. “When our nation was heading towards prosperity, they toppled our government. Shehbaz Sharif polished the shoes of American ambassadors. Once Maryam Nawaz invited an American ambassador and the way she acted towards her, she might as well have let her walk on her.”

Imran also said that Pakistan’s biggest thieves and mafia leaders had banded together but thanked the Almighty as the nation has risen and stood up against them. “These mafias that suck the blood of the nation will receive their comeuppance,” he added.

Imran said Zardari was Pakistan’s biggest beemari (disease). “Zardari was happy that all the abuses are being hurled at Shehbaz. Asif Zardari is the biggest beemari for this nation. He’s enjoying being in the Centre as well as in Sindh and making money. Zardari, you’re too much for Shehbaz.”

Imran said Sharif brothers were stuck and didn’t know what to do. “They have the ocean in front of them and behind them, they see Imran Khan along with the entire nation…. what can they do? they’re stuck,” he said and added that there will be an ocean of people in Islamabad soon which will bring an end to the current government’s rule.

“People ask Shehbaz Sharif what he has done? Why was he in a hurry to become prime minister? Because he had a case and was about to be punished by the FIA. So he used a foreign conspiracy to evade punishment. Shehbaz doesn’t be delusional, we will not let you go,” he added.

“Someone asked me who was involved in bringing your government down, I said all of them… they needed a collective effort to bring me down but don’t care about the premiership because my nation has risen.”