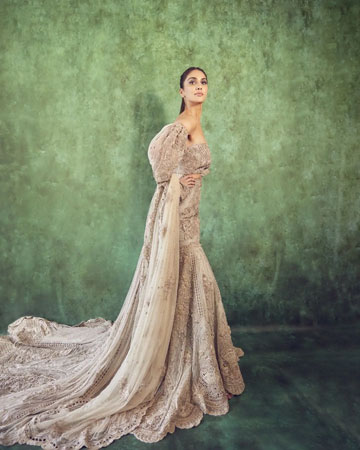 When it comes to fashion, the cross-country rivalry is almost non-existent. Time and again, Bollywood divas have opted for Pakistani ace designers and vice versa; it’s apparent that our stars’ sartorial choices are solely based on merit, talent and what wins the heart. A recent addition to such welcome crossovers is Bollywood actor Vaani Kapoor in a dull gold festive outfit by Pakistani designer Shehla Chatoor.

Chatoor took to her Instagram to flaunt her regal creation on Kapoor. She posted a picture of the actor posing in her two-piece mermaid-fit lehenga choli with a long train, writing, “The quintessentially elegant Bollywood superstar Vaani Kapoor radiates glamour in our wedding couture.”

Kapoor also posted a series of pictures on the media sharing app and tagged the designer. The tube top choli was beautifully accented with intricate traditional hand-crafted marori and zardozi detailed motifs and embroideries. To further accentuate Chatoor’s signature ethos, the choli was paired with balloon sleeves that ended straight on the arms for a royal princess-y look. Kapoor finished the look with a smoky eye and a sleek ponytail.

Another Pakistani designer famous in Bollywood is Faraz Manan. From dressing up the likes of Deepika Padukone to Alia Bhatt, the popular designer is well recognised for his work across the border. While Manan’s creations are mostly solids, Chatoor’s take on fashion strives towards a fusion and contemporary cuts. “I don’t think it would be wrong to say that I like it when I’m picking my dresses from not a single but a handful of my collections,” the ace designer previously shared with the press.