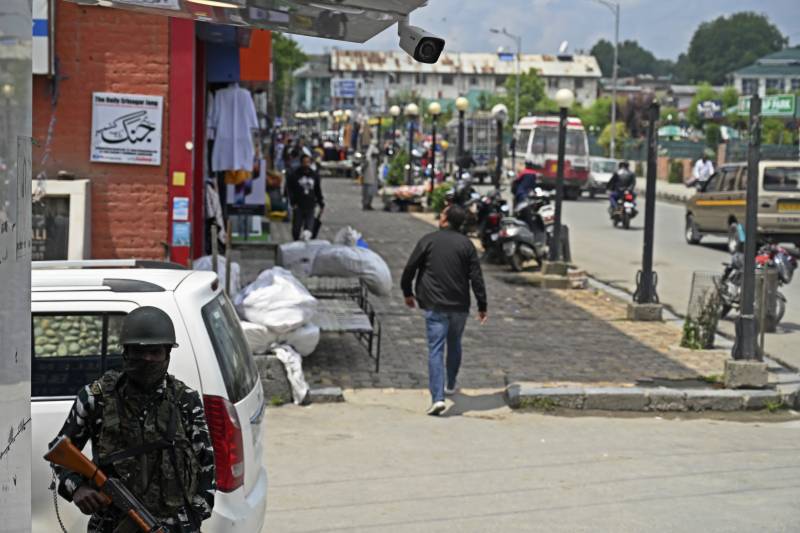 In Indian-occupied Kashmir, shopkeepers are spending hundreds of dollars each to install security cameras mandated by authorities in a move activists say is aimed at creating a surveillance state and outsourcing the cost.

Prime Minister Narendra Modi’s Hindu nationalist government has struggled to quell a decades-old insurgency and strengthen its hold over the Muslim-majority region, where a large number of people do not want to be part of India.

Half a million soldiers are stationed in the portion ruled by India and a 2019 security crackdown has seen unprecedented restrictions on protest and press freedoms.

Already there are security cameras on almost every street in Srinagar, Kashmir’s largest city, and in other towns. But last month, local administrators instructed shopkeepers to install CCTV systems inside their premises — at their own expense — to enhance the police’s ability to watch people’s every move.

The orders say the scheme will “deter criminals, (and) anti-social and anti-national elements”, while outlining minimum standards for camera resolution, infrared capability and range.

Always on, the systems should record and store footage for 30 days to be produced on demand from “police and any other law enforcement agencies” without a court order.

Failure to abide by the orders, which took effect in April, is punishable by a fine or a month’s imprisonment.

Surveillance system dealers in Srinagar told AFP that meeting the CCTV standards would cost each of Kashmir’s thousands of stores upwards of 40,000 rupees ($524).

Because of the territory’s frequent power outages, shopkeepers also need to pay for battery backups to ensure uninterrupted recording.

“The specifications given in the order make it unaffordable for me at a time when business is down,” Bilal Ahmed, who runs an ice cream parlour in Srinagar’s main business district, told AFP.

Ahmed said he was waiting to see whether others would abide before deciding what to do, but many are already installing the systems to avoid potential punishment.

“This order is wrong. But if this is what they want, then the government should pay for it,” another Srinagar shopkeeper said while begrudgingly installing a camera system, speaking anonymously for fear of government reprisals.

Mujahideen groups in Kashmir have waged battle against Indian forces for over three decades, seeking independence or a merger with neighbouring Pakistan, which has fought two wars with India over control of the region.

The conflict has killed tens of thousands of people, mostly civilians, and also thousands of Indian soldiers. Only last week a member of the Hindu minority was gunned down.

India has long relied on an array of surveillance techniques to avert militant activity and combat dissent against its rule.

After 1947, when Kashmir was divided between newly independent India and Pakistan, police officers went door to door to confiscate radios of households that listened to Pakistani broadcasts.

It has also imposed a rigid security framework that has rendered public protest virtually impossible.

It will legitimise “a complete surveillance of their civic life, threatening their human rights to privacy, freedom of assembly, autonomy and dignity”, Patel told AFP.

Hundreds, including suspected protesters, dissidents and journalists, have been arrested and are languishing in Indian jails — sometimes for years and often without charge or the option to get bail.

They include three students detained for five months after cheering Pakistan in a 2021 cricket match against India.

Arrests over social media posts criticising the government are common and police have a robust network of paid civilian informers.

Residents, including journalists, are regularly summoned for “background verifications”.

If someone does not show up, their relatives can be held until the person reports to the police.

But snooping techniques have become more sophisticated, with security forces installing an expansive network of cameras to monitor insurgent activity.

An official document seen by AFP says this will include 1,100 cameras with facial recognition capabilities and centralised command centres for live police monitoring.

Repeated requests to authorities for comment on the legality of the CCTV order to shopkeepers went unanswered.

“But the government describing it as related to Kashmir’s security trumps every other consideration,” one lawyer said on condition of anonymity.