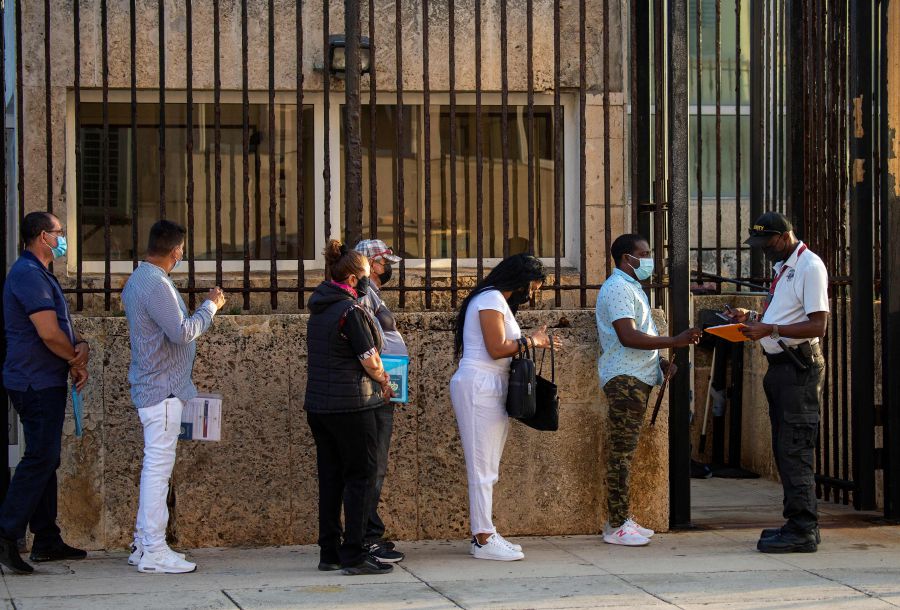 Washington: The United States said Monday it is easing restrictions imposed during former President Donald Trump’s administration on travel to Cuba and on the sending of family remittances between the United States and the communist island.

“The Cuban people are confronting an unprecedented humanitarian crisis and our policy will continue to focus on empowering the Cuban people to help them create a future free from repression and economic suffering,” the State Department said. The loosening of the embargo on Cuba will see increased visa processing, including at the Havana consulate, but with most visas still handled at the US embassy in Guyana.

The statement said it will “facilitate educational connections” between the two countries, as well as support for professional research including “support for expanded internet access and remittance process companies.” To boost the flow of remittances, the US government will lift the current limit of $1,000 per quarter for each sender, and also allow non-family remittances to “support independent Cuban entrepreneurs.”

It said it would increase the number of flights permitted between the US and the Caribbean island, and serving cities other than the capital Havana. It will also allow certain group visits, which are currently forbidden. Cuba’s foreign minister, Bruno Rodriguez, tweeted that the move was “a small step in the right direction,” but emphasized that it does “not modify the embargo” in place since 1962.

“Neither the objectives nor the main instruments of the United States’ policy against Cuba, which is a failure, are changing,” he wrote. US Senator Bob Menendez, chairman of the Senate Foreign Relations Committee and a member of President Joe Biden’s Democratic Party, denounced the lifting of some restrictions, saying that the Cuban regime “continues its ruthless persecution of countless Cubans from all walks of life” following unprecedented street protests last year.

The easing of travel “risks sending the wrong message to the wrong people, at the wrong time and for all the wrong reasons,” he said in a statement. “Those who still believe that increasing travel will breed democracy in Cuba are simply in a state of denial. For decades, the world has been traveling to Cuba and nothing has changed.”

Republican Senator Marco Rubio, who is of Cuban heritage, also slammed the announcement, saying on Twitter that the Cuban regime “threatened Biden with mass migration and have sympathizers inside the administration.” He said “the result is today we see the first steps back to the failed Obama policy on Cuba,” referring to former President Barack Obama’s thaw in relations with Havana, including a visit there in 2016.

Biden is seeking to tread a fine line between helping ordinary Cubans and encouraging democratic developments while not allowing the Communist regime to benefit from any easing of restrictions.

The thaw comes in the wake of a series of mysterious illnesses suffered by US personnel and family members in Cuba in what has come to be known as “Havana Syndrome.” US officials say they have yet to determine exactly what happened in the incidents but a senior official told reporters that there is an “appropriate security posture.”