Adnan Siddiqui finally gets an audience with Nawaz Sharif 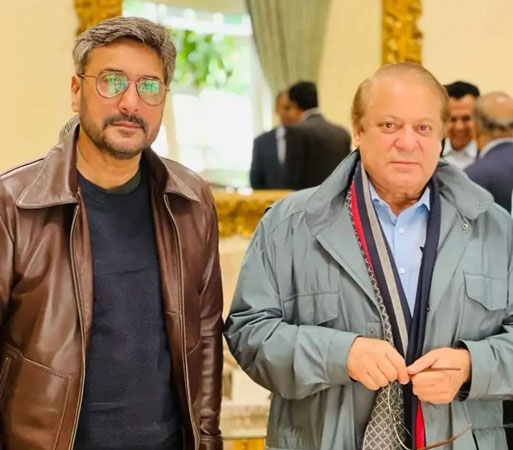 Actors are as curious about politics and political leaders as any normal citizen. Therefore, it came as little surprise when actor Adnan Siddiqui was seen in the audience with deposed prime minister Nawaz Sharif on Monday.

A video recorded outside the office shows Siddiqui interacting with Sulaiman Shehbaz.

Shehbaz can be heard asking Siddiqui whether the actor is going for a walk in the neighbourhood. Instead, Siddiqui says he was there to meet with Nawaz.

Startled, the official inquires whether Siddiqui had an appointment with the former prime minister, to which Siddiqui replies in the affirmative.

Siddiqui is then promptly invited inside the office.

Later, a picture was released of Siddiqui standing with Nawaz.

Shehbaz can be heard asking Siddiqui whether the actor is going for a walk in the neighbourhood. Instead, Siddiqui says he was there to meet with Nawaz

“It was a great meeting,” Siddiqui recalled in a video message recorded after the meeting.

“I came to promote my film and invite him to come watch the movie.”

The veteran actor added that Nawaz was told how they had worked hard to make the movie.

Siddiqui said that in his remarks, Nawaz told him that the government is cognizant of the contribution and efforts of his fraternity and has worked on policies specific to their sector.

Siddiqui is not the first celebrity to hobnob with senior politicians or even former prime ministers.

Singer Abrarul Haq and television host Aamer Liaquat and actor Hamza Ali Abbasi are celebrities who have enjoyed the company of senior political leaders and prime ministers, with the former two doing so as members of parliament.