Early elections my only demand 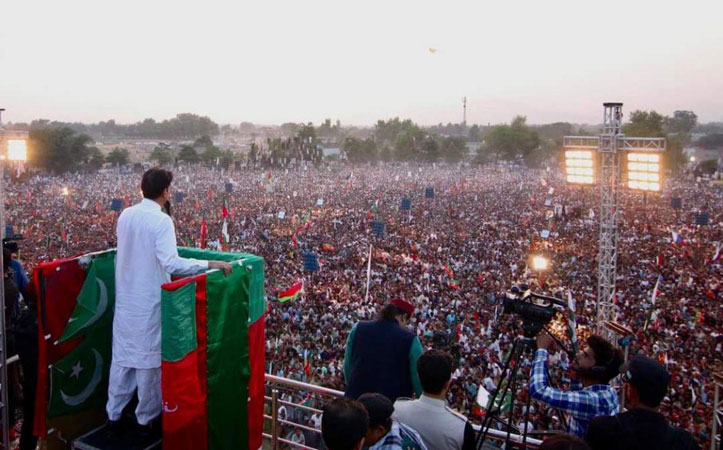 Former prime minister and PTI Chairman Imran Khan Monday reiterated his demand for early polls and said he will never accept the ‘imported’ government which came into being after a ‘foreign conspiracy’.

“We will never accept these criminals who have been imposed upon us. We only want one thing and that is early elections we will accept this imported government under
no circumstances,” he said
while addressing a public gathering in Swabi.

He urged the youth to get ready for the struggle against the ‘foreign-backed’ regime.

“We also have to protest against those who imposed them upon us,” he added.

Khan said Zardaris and Sharifs ruled for 10 years before the PTI came into power and the country suffered 400 drone attacks during their tenures but they did not condemn even a single incident. A 60-feet-long and 30-feet wide stage was set up at the Swabi Stadium for the rally. A large number of PTI workers and supporters flocked the venue of the public gathering. Strict security measures were put in place. “Do you know what drone attacks are? A computer game is played 4,000 miles away in the US where a button is pressed and women and children die here,” Khan said, says a news report. He said in a drone attack in Waziristan, 60 people were killed and in another one targeting a madrassah, 64 children died. “When people came to rescue those who were injured, the drone attacked them as well, killing more people,” he added. The PTI chief said hundreds of thousands fought on behalf of British from India but no one thanked them because India was their colony and “slaves don’t have any respect”.

He said 80,000 Pakistanis sacrificed their lives for the US war in Afghanistan and 3.5 million became Internally Displaced Persons (IDPs). “Our forces gave three times more sacrifices than the US army. Instead of thanking us, they say they could not win the war in Afghanistan because of Pakistan. Now, they have imposed their slaves here so they can do whatever they want but we will never accept the US slaves under any circumstances.” According to the schedule, the Swabi rally will be followed by one in Kohat on May 17 while the fifth such rally would be held in Mardan on May 20. The former prime minister is expected to announce his planned long march to Islamabad any day after May 20.

Imran Khan said that the US chose these two families – Bhuttos and Sharifs – because they know they can never take a stand against them as they have no spine. “They only care about their money parked in London and other foreign countries,” he added.

“For the last 30 years, Bhuttos and Sharifs are ruling this country. Today [PM] Shehbaz Sharif says we’re beggars that’s why we’re slaves. Their minister says we have to worship the US because our economy is on ventilator.”

The former prime minister said that the US knew that Imran Khan will never give them any (air) bases or do anything against the interests of his people. “That is why this conspiracy was hatched,” he explained.

FIA officers who arrested the corrupt are now being targeted, said Khan. “One of them died because of a heart attack and another is in serious condition. I will tell you what is the poison used that causes a heart attack.”

He said that FIA was now being ruled by “butcher of Faisalabad” Rana Sanaullah. “Now they will do what MQM did to Sindh police. MQM targeted each and every police officer involved in operation against them and to this day Sindh police could not stand on its feet and Rangers had to be called.”

The PTI chairman said that no nation in the world can progress if its moral standing is not high.

“If the biggest criminals of the country take top position, no nation can progress,” he added.

Lastly, he urged the youth of the city to come with him to protest against the current regime. “When I will give you call, I want to meet the brave youth of Swabi in Islamabad. Those who cannot come to Islamabad should protest here and say they do not want imported government and slavery,” he further said.

He lashed out at the Muttahida Qaumi Movement-Pakistan (MQM-P) and recalled the Karachi-based party’s alleged targeting of police officials in the 1990s. He recalled that there was an operation against the MQM in 1996, after which it struck a deal with the then PML-N government.

“The MQM then targeted and killed every police officer involved in the operation and till now Karachi police have not been able to stand on their own feet,” the PTI chairman said.

He said institutions were “destroyed” in this manner when criminals were appointed as their heads. “That is why we have to combat them and protect our country against thieves and slaves of the US.”

Imran also lashed out at the Sharif family for the corruption cases against them before assailing PPP co-chairperson Asif Ali Zardari and Jamiat Ulema-i-Islam-Fazl chief Maulana Fazl Rehman. “All of them have become united in defeating Imran, but all of them will have a collective funeral,” he remarked.

Calling on the crowd to reach Islamabad on his call, Imran said there was only one demand from the people: a new election date so the nation could decide its leadership.

Imran praised Khyber Pakhtunkhwa for being the province with only one PTI dissident and said it reflected the strong ethics, values, faith and loyalty of the people. He said the entire country knew about the lotas (turncoats) of the PTI but the ECP (Election Commission of Pakistan) refuses to see that way.

“It is finding ways to protect them. These turncoats will not be spared by people,” he warned.

He added that in Pakistan, everybody knows who were the turncoats but the Election Commission of Pakistan (ECP) did not understand.

“The ECP is trying to protect the turncoats,” he said as he accused the commission, recalling that during his last public gathering in Faisalabad, people promised him that not a single turncoat will win the next general elections.