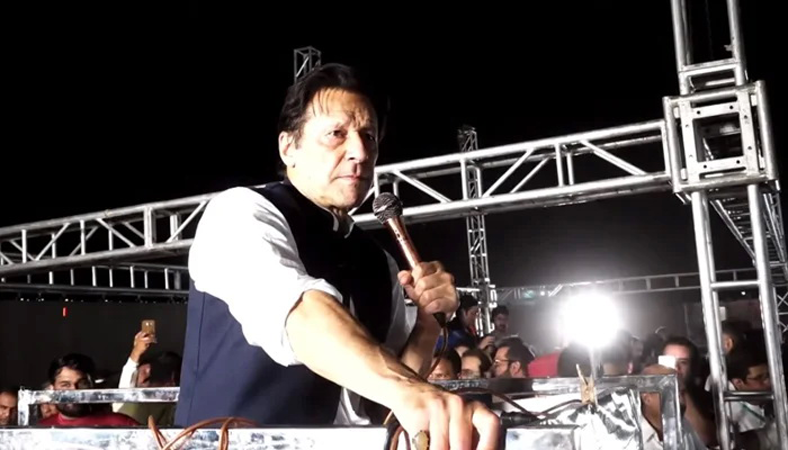 PTI Chairman Imran Khan said Saturday he has recorded a video of the characters behind the “conspiracy” against his government, and if something happens to him, it will be released. “They have deiced to kill Imran Khan. And this is why I have recorded this video as I don’t consider what I do as politics, but this is jihad to me,” the PTI chairman said while addressing a rally in Sialkot.

“There is a conspiracy hatched against me in closed rooms in and outside the country, and they want that Imran Khan’s life [is lost],” he said.

“I knew of this conspiracy … so I have recorded a video and kept it in a secure place. If something happens to me then this video will be [made public] in front of the nation. In it, whoever has conspired against me, whoever is complicit since last summer, I’ve named everyone.

“They think ‘Imran Khan can be an obstacle in our path and needs to be removed.’ And that’s why I’ve recorded this video because I think this is jihad and not politics. If something happens to me then I want all my Pakistanis to know who was complicit in this conspiracy.

“I’ve named everyone who planned and [revealed] how, through a foreign conspiracy, this corrupt lot, together with them, and others who were with them, ended my government. I recorded the video because it’s [part of the] history of how the powerful are never brought under law and always remain safe. Those who betrayed this country, I want their faces to come in the open,” the PTI chairman said.

Khan said that during his tenure, he wanted to hold the corrupt politicians accountable, but the “powerful people” who could do that have now accepted corruption as a norm.

The PTI chairman told the judiciary that Rs24 billion corruption cases were filed against Prime Minister Shehbaz Sharif, Chief Minister Hamza Shahbaz, and his brother, Salman Shahbaz. “So tell me a country where the [authorities] make cases against you and when you come into power, you remove all those officials who were investigating the cases against the corrupt politicians,” Khan said.

He paid tribute to former Federal Investigation Agency (FIA) director Dr Rizwan, who was bold enough to continue investigating corruption cases against the “Sharif mafia”. But when the PML-N came into power, “Dr Rizwan was pressurised; Hamza Sharif threatened him and Dr Rizwan came under severe pressure, had a heart attack and passed away”. Khan claimed that another FIA official, Nadeem Akhtar, also suffered a heart attack. “I want to ask a question: the officers who investigate the cases of mafias are under severe pressure, how is this possible? Where are my courts? It is your job to ensure they are safe.”

“During my 3.5 years I tried my best that those looting this country for the last 30 years got sentenced and action was taken against them, but those in powerful positions, who were supposed to do justice, did not consider corruption bad. They’ve accepted that the powerful will steal and no one will catch them.”

Imran urged his supporters to participate in his planned march towards Islamabad, warning that if they did not do so then “this country will be destroyed.” He told his audience to brave the climatic hardships that the scorching summer is likely to throw at them on their way to the capital.

The PTI chairman also called on the youth to “start preparing immediately” for the march, adding that the government would try to impede the march by putting curbs on transport, petrol, internet and other services.

He predicted that a “sea of people” would be by his side when he heads to Islamabad.

Imran asked the judiciary further why they were not taking any action despite witnessing “destruction of the country and national institutions”. “If you don’t want to nab and punish them, then let free all small criminals who are currently behind bars.”

The PTI chief claimed that the country achieved the highest industrial progress during his rule, with the crowd cheering to endorse his views.

“Pakistan had its industries, crops, and exports all grew to new highs while unemployment dropped, during my government,” he maintained.