Exemplary punishment for those behind attack on Chinese teachers 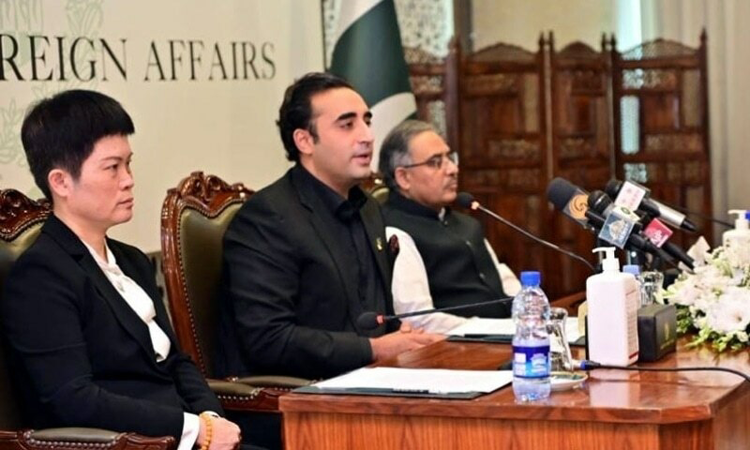 Foreign Minister Bilawal Bhutto Zardari Saturday expressed his determination to not allow anyone to harm the iron-clad friendship between Pakistan and China and underscored that the Pakistan-China “iron-brotherhood” would continue to grow.

He also reiterated his strong condemnation of Karachi terrorist attack and reaffirmed the government’s commitment to thoroughly investigate the incident and bring the perpetrators to justice.

The foreign minister said that the entire nation grieved with the families and people of China at this terrible loss, and offered his heartfelt condolences. A solemn memorial service was held at the Ministry of Foreign Affairs to honour the lives and services of the victims of terrorist attack in Karachi University on April 26.

Three Chinese teachers Huang Guiping, Ding Mufang and Chen Sai, as well as their Pakistani driver Khalid Nawaz laid down their lives in the line of duty on that day.

The memorial service was attended by Chargé d’Affaires of the People’s Republic of China in Islamabad Pang Chunxue, senior Chinese officials and Chinese nationals from all walks of life in Pakistan. Foreign Secretary Sohail Mahmood and officers of the Ministry of Foreign Affairs also attended the ceremony, Foreign Office Spokesperson said in a press release.

Speaking on the occasion, Cd’A Pang Chunxue thanked the government of Pakistan for organizing the memorial service and appreciated the expression of solidarity and support by the entire Pakistani nation against the cowardly attack.

She vowed that the blood of the Chinese people in nurturing this timeless friendship would not be in vain, and that any attack aimed at the all-weather strategic cooperative partnership between Pakistan and China was doomed to fail.

The foreign secretary, in his remarks, highlighted that the tragic deaths of innocent teachers had caused deep shock and anguish to every Pakistani, but this had not deterred their resolve to defeat the scourge of terrorism.

He underlined that Pakistan and China had always stood by each other and expressed the confidence that the two countries could counter any challenge working together in their long-standing spirit of mutual support and close cooperation.

On the occasion, the foreign minister also laid floral wreaths in remembrance of the ultimate sacrifice of the Chinese teachers and recorded his remarks in the condolence Book.