Govt to complete its constitutional tenure 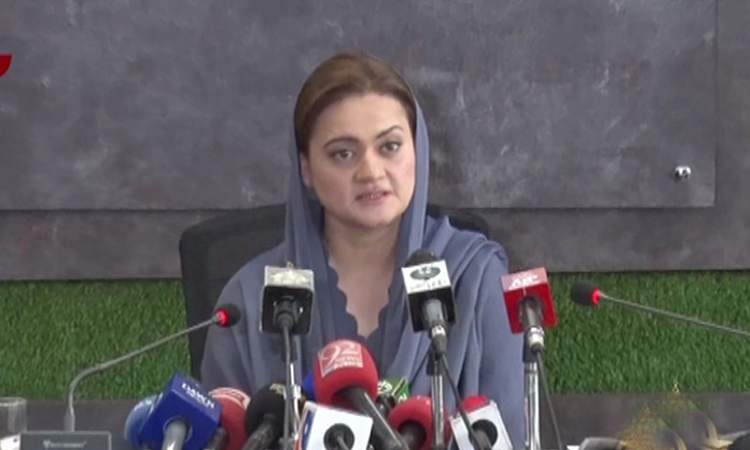 Information Minister Marriyum Aurangzeb said Saturday that the newly-elected Shehbaz Sharif-led government would complete its tenure in line with the Constitution. The statement comes after PML-N’s senior leadership held a huddle in London – the details of which are expected to be released soon – as speculations are being over the government’s tenure. Addressing a press conference, Marriyum Aurangzeb said former prime minister Imran Khan Naizi wanted to create chaos and anarchy in the country by imposing his decisions by bullying and hurling threats to avoid accountability. She said PTI Chairman Imran Khan had adopted the fake narrative of foreign conspiracy, but he could not divert the masses’ attention from the loot and plunder of his four-year rule which had ruined the national economy, tarnished Pakistan’s image in the world and damaged relations with friendly countries.

He was responsible for the current economic catastrophe, high prices of petroleum products, dollar’s flight from the country and inflation, she added.

The “gang of the inefficient and incompetent, thieves, liars, corrupt, cartels and mafias” remained clung to power for four years at the Centre. They even violated the Constitution from April 3 to 11 to remain in power and same “dirty practice” continued in Punjab.

The Pakistan Tehreek-e-Insaf (PTI) leadership wanted to remain in government by hook and by crook through violating the Constitution and attacking the Parliament, she added.

Ironically, who had looted the national wealth for four years was asking questions from those who had been in power for four weeks only, the minister said.

Marriyum said the Khyber Pakhtunkhwa government’s helicopter was illegally being used for the PTI’s rallies held across country, including the one in Sialkot. The people were fully abreast of the tales of Imran’s corruption like helicopter case, BRT Peshawar case, Malam Jabba and other scams, she added. “In what capacity Imran Niazi is using the Khyber Pakhtunkhwa government’s helicopter?” she asked.

She said she wanted to tell the people, particularly the youth, that doors of Accountability Commission remained locked in Khyber Pakhtunkhwa during nine years rule of PTI, which was, in fact, aimed suppressing the facts about the misuse of helicopter by Imran Khan.

Besides abusing the national institutions, the PTI leadership misused the government resources, the minister said.

Marriyum recalled that the incompetent previous regime put its political opponents to death row cells in prisons by leveling false allegations against them and media was silenced, journalists attacked and their daughters abducted outside their homes. The minister said during his four years in the PM Office, Imran Khan had got off air many talk shows to suppress the voice of truth. He even misused his powers and run the Parliament through ordinances.

About the row over the PTI’s Sialkot public meeting, the minister said the CTI Boys High School management, in a letter to the Deputy Commissioner Sialkot on May 9, protested PTI’s scheduled meeting at the CTI Ground. She said the Christian community had been playing a big role to play in the development of Sialkot and Pakistan, and they wanted the PTI to hold the meeting somewhere else as the CTI Ground was a place of worship for them.

The PTI leaders, she said, were asked to hold their meeting at a sports gymnasium or a school premises but they insisted on using the church space through bullying. On May 9, the minister said, the PTI was informed that the Christian community was not allowing a public meeting at their church ground as till today no political activity had taken place there. The government was bound protect the rights of the Christian community, she added.

The Christian community, she said, had started protest demonstrations, demanding that the venue of the meeting should be changed but instead Imran Khan had made announcement that he was coming to Sialkot without paying heed to their demand. No one was stopping him (Imran) from coming to Sialkot as the PTI had held public meetings before without any hindrance before, she added. “We are neither fascists, nor afraid of his speeches.”

The people in fact had come to know about their objective through the PTI rallies, which totally went into the incumbent government’s favour, she added.

The minister said the PTI wanted to create chaos and anarchy in the country, but as Interior Minister, Rana Sanaullah would his responsibility to protect the lives of people. She said a person who was sitting in the PM’s chair a few days ago was threatening the national institutions. Imran Khan, who had destroyed economy for four years and deprived six million people of their jobs, would have to be held accountable.

In 2018, when the Pakistan Muslim League-Nawaz was still in government. she said, electricity per unit tariff was Rs 11 with over 14,000 megawatt power generation being done. On the contrary, when Imran Khan was removed from power, electricity tariff was Rs 24 per unit, while he could not add even a single megawatt of electricity to the system. Even his regime did not get repaired the power plants and ultimately heavy load-shedding the people’s lives miserable.

Similarly, she said, the Imran government increased the gas tariff from Rs 600 to Rs 2,400 which badly affected the consumers. The price of DAP fertilizer bag had gone up from Rs 2,400 to Rs 10,000, while its non-availability to the farmers hampered agriculture produce .

Lies about increase of the agri production were told unabated, while undue profits were earned by the cartels and mafias close to the former PM, she added.

The PTI chief, she said, could not divert the people’s attention from his government’s bad performance, and loot and plunder by “waving a paper and claiming a foreign conspiracy” behind his ouster from power.

The former PM, the minister, also exploited the religion by using the name of State of Madina and incarcerated the opposition leadership. She said the PTI rulers snatched the jobs of people and burdened them with ever rising inflation, “They should be ashamed for their inefficiency and incompetence.”

Marriyum said the last PML-N government had made Pakistan an emerging business hub with growth of 6%, but when he (Imran) came into power “through crutches” he plunged the country into the worst economic catastrophe.

The China Pakistan Economic Corridor, she added, was being executed for the development and progress of the country and its people, but through controversial his statements about CPEC and stopping its projects, Imran had soured Islamabad’s relations with Beijing.

Imran Khan had stolen the gifts, given by friendly countries, from the Tosha Khana, and purchased many gifts at low price, she said.

“We are a capable team, as we had reduced inflation in the country from 2013 to 2018 and strengthened the value of the dollar,” she added.

Replying to media persons’ questions, the minister said that PML-N leadership’s visit to London was a private trip and its expenses were borne by themselves. The PML-N was the country’s largest political party, and its leadership held consultations on the issues, such as inflation, petroleum prices and negotiations with the International Monetary Fund.

She said the incumbent government was endeavouring that the masses should not be burdened or minimum burden should be passed on to them of the four years of PTI misrule. The decisions would be made in consultation with the coalition partners, she added.

She said Imran’s narrative of lies would not work anymore and the masses would accept only that narrative which would control inflation, provide them employment opportunities and restore the image of Pakistan in the comity of nations.

The minister said it transpired during the London consultations that it was high time to control the tendency of violation of the Constitution for petty political gains.

She said PM Shehbaz after his return from abroad, would take all the allies on board and make important announcements in his address to the nation in coming days.