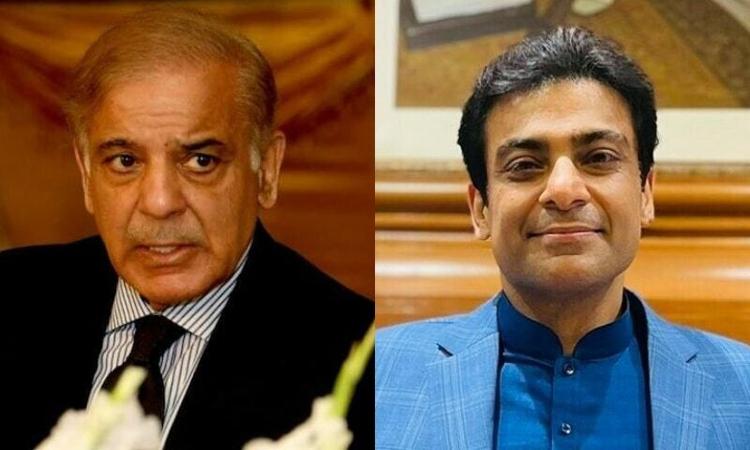 The indictment of Prime Minister Shehbaz Sharif and his son, Punjab Chief Minister Hamza Shehbaz, in Rs16 billion money laundering case, was differed once again on Saturday. When the hearing resumed, their lawyer, Mohammad Amjad Pervaiz, submitted an application on Shehbaz’s behalf, seeking exemption from appearance. The application, a copy of which is available with Dawn.com, stated that Shehbaz was scheduled to return from his visit to the United Kingdom on May 13 but was delayed since an appointment with his medical consultant could not be set up before 12:30pm. Shehbaz was a cancer survivor and a patient of chronic backache and his medical checkup had been long overdue since the previous PTI government did not allow him to fly abroad, it stated.

The application further stated that Shehbaz also had to reschedule his return so he could visit the United Arab Emirates (UAE) to offer his condolences on the passing away of the country’s president, Sheikh Khalifa bin Zayed Al Nahyan.

“The non-appearance of the petitioner is neither malafide nor intentional, rather, the same is on the account of the above said reason,” it added.

Subsequently, Presiding Judge of the Special Court (Central-I) Ijaz Hassan Awan accepted the application and extended Shehbaz and Hamza’s pre-arrest bails till May 21.

The Federal Investigation Agency (FIA) had booked Shehbaz and his sons Hamza and Suleman in November 2020 under sections 419, 420, 468, 471, 34 and 109 of Prevention of Corruption Act and r/w 3/4 of Anti Money Laundering Act. Suleman Shehbaz is in the UK and has been declared an absconder.

Fourteen others have also been named in the FIR under sections 5(2) and 5(3) (criminal misconduct) of the Prevention of Corruption Act.

The special court had on Jan 27 granted pre-arrest bail to Shehbaz and Hamza in the case.

Earlier during the hearing, Judge Awan observed that the proceedings could once again not move forward because of the exemption application.

FIA prosecutor Farooq Bajwa said the agency had no objection to the application and pointed out that the presence of all the suspects was necessary.

He informed the court that it was his first appearance in the case.

Meanwhile, Shehbaz and Hamza’s lawyer, Pervaiz, argued that all the companies named in the case were registered with the Securities and Exchange Commission of Pakistan (SECP).

Shehbaz had never been the director or shareholder of the companies, he said, arguing that the case was registered during the previous government’s tenure without any investigation.

“None of the witnesses who testified pleaded guilty. The former interior minister had the testimonies written in his presence. Shehbaz and Hamza were in jail at the time.”

The judge noted that the FIR mentioned a “cash boy” to which Pervaiz responded that his clients were accused of laundering money through various accounts.

However, there was nothing on record against Shehbaz that would prove the case, he argued.

The FIR was based not on facts but “wishes” and a “baseless and fake” case was registered at the previous government’s behest, the lawyer said. “The FIA has tried to mislead the court by making a case on the basis of malice. A media trial of Shehbaz and Hamza was held.”

He repeated that Shehbaz had no connection with the companies’ employees or their accounts.

“Masroor Anwar was an employee who used to withdraw cash but under which law is that a crime? NAB (National Accountability Bureau) has also filed a reference after detailed investigation.

“Speaking of Maqsood Chaprasi, how many times will a suspect be sent to jail on the same charge?”

NAB had not said anywhere after investigating that Masroor Anwar gave money to Shehbaz, Pervaiz continued.

He told the court that the FIA had not submitted a challan to a banking court and when it feared action would be taken against it, it submitted an interim challan. The FIA did not submit a challan for seven months because it had no evidence and was using delaying tactics, he argued.

“The purpose was only to hold a media trial. The previous government’s purpose was to make Shehbaz and Hamza appear in the court in one case. The FIR was lodged for character assassination and the political narrative.”

Suleman used to do business which was not a crime under any Pakistani law, he contended, to which the judge replied that Suleman was an absconder.

However, the lawyer argued that it should be seen who declared Suleman an absconder since the special court had not done so. “Benami transactions were not a crime prior to the Benami Transaction (Prohibition) Act 2017 which was introduced in 2017,” he added.

The judge then questioned how a clerk could open a bank account saying he had a sugar business.

Sugarcane traders also said the same when they opened a bank account and it was not a crime, Pervaiz responded.

A person cannot be arrested twice in the same case on the basis of the same accusation, he said.

Subsequently, the court directed the counsel to complete his arguments at the next hearing.