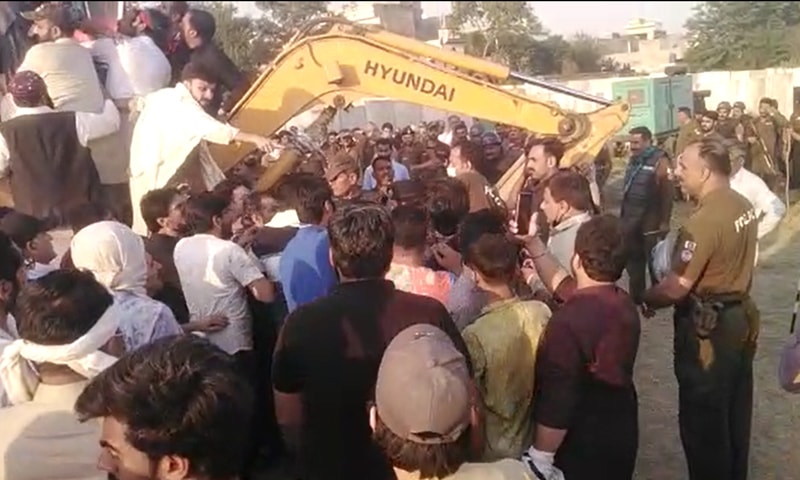 The PTI on Saturday changed the venue to ‘Vip Cricket Ground’ for its power show in Sialkot after the Christian community lodged a protest, as the party had not taken prior permission to hold the gathering.

In a series of tweets, PTI Chairman Imran Khan confirmed that he will be addressing the Sialkot jalsa and said the administration’s actions against party leaders were “outrageous, but not unexpected”.

“This bunch of criminals out on bail and their convict mafia boss in London have always used fascist tactics against opponents,” the ousted prime minister said.

The PTI chairman reminded the PML-N that during his party’s government, they had never stopped any of their jalsas, sit-ins, or rallies because they were committed to democracy.

when they are in power – storming of SC, Model Town murders, bribing judges, NS trying to declare himself Amir ul Momineen. They use & abuse democracy when in opposition & totally destroy all democratic norms when in power. But ppl have now risen ag them. #امپورٹڈ__حکومت__نامنظور

“I will be in Sialkot today and I am calling on all our people to come out and protest in their areas after Isha prayers against this fascist imported government,” he added.

Earlier on late Friday night, police in Sialkot stormed the venue of the Pakistan Tehreek-i-Insaf’s (PTI) public gathering and got the rally venue vacated as PTI tried to hold a public meeting at the CTI ground, a property of the Christian community, without their consent.

The police raided the jalsagah with heavy machinery over preparation for a public rally in the city. A scuffle broke out between PTI workers and police at the venue.

The party workers resisted the police operation as they stood in front of the machinery sent to remove the chairs, the stage and other material arranged for the event.

A day earlier before PTI jalsa, the district administration of Sialkot had rejected PTI’s request for holding a rally at the CTI ground after the Christian community raised objection over the PTI’s scheduled meeting at their property.

Talking to the media, PTI leader Usman Dar said that the party had been granted permission for the event eight days back. “But only yesterday the authorities withdrew the permission,” he said.

In a related development, PTI Chairman and former prime minister Imran Khan called a meeting of the party leaders to discuss the situation in Sialkot.

However, PTI leader Shehbaz Gill said that what the nation witnessed was an act of intimidation by the goons of the ‘imported government’.

Taking to Twitter, he said that holding public gatherings was the party workers’ basic right, and none could snatch that right from them.

He went on to add that the ‘imported government’ whose days had been numbered was resorting to such brutal tactics because it was feeling jittery on account of PTI’s rising popularity. “Police’s operation in Sialkot is a clear reflection of that nervousness,” he added.

Moreover, reacting to the police action in Sialkot, former federal minister for planning Asad Umar said  “The nation is not afraid. Get ready Sialkot! Imran Khan is coming this evening.”