Army chief should have a ‘flawless’ reputation 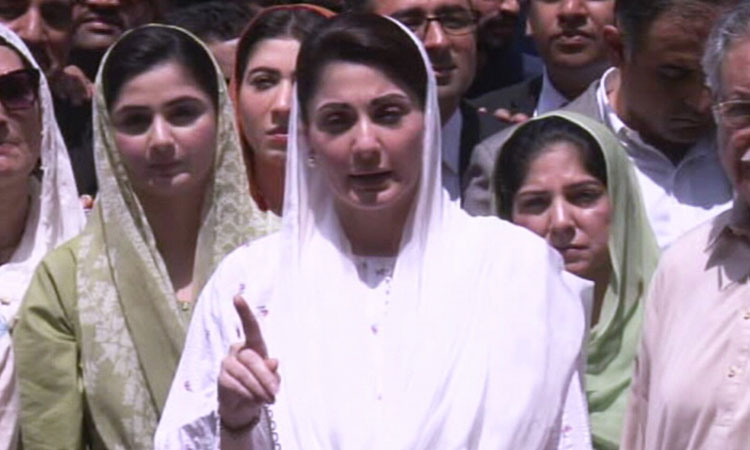 PML-N Vice President Maryam Nawaz Thursday said the army chief should be a person who had a ‘flawless reputation’ and was free from any criticism or doubts.

She made these remarks in a press conference outside the Islamabad High Court while responding to a question about Defence Minister Khawaja Asif’s comments that former ISI chief Lt Gen Faiz Hameed’s name could be considered for the new army chief. “If his name is on the seniority list, it will definitely be considered,” Asif had said in an interview with the BBC.

Talking to the reporters outside the IHC, Maryam said that the army was a respectable institution for the country and its people. “The nation looks at the army for the unity and security of Pakistan. So it is important that the army chief is a person who is worthy and stainless so that people salute the Pakistan Army.”

Maryam added that it was a “good thing” that the military had decided to stay away from politics and limit itself to its constitutional role, something politicians had struggle for.

“But there’s only one man who has a problem with this … who has gotten used to cheating, who doesn’t have feet of his own and needs support,” she said. “And it suits him to drag institutions into politics and make them controversial. It’s only one man and his name is Imran Khan.”

Maryam also asserted that elections had to happen and they were the solution to the crisis.

She said that a short-term coalition government could not make big decisions. “Nawaz Sharif inherited Pakistan in a bad shape but eventually things got better in two to three years. Unfortunately, this interim setup cannot do it.”

“I just want people not to get lured [into backing the opposition] and I want them to vote for Nawaz Sharif whenever elections are held,” the PML-N leader said.

Meanwhile, recalling her conversation with Professor Israr and Hakeem Saeed in the 1990s, she said that she now understood when people said Imran Khan was being prepared to “ruin Pakistan”.

“The conspiracy that he hatched against Pakistan, even if all countries united, they couldn’t have done it,” she claimed, saying that the man who was primarily responsible for the country’s economy today was blaming the PML-N government for inflation.

“But people know that you are to be blamed for this inflation and destruction,” Maryam said. “When you bring a cricketer into power, he will do this. He does not know what the economy is. The way Imran ruined Pakistan’s ties with other countries will badly affect our foreign policy. We will have to spend years to rectify it.”

“Rupee shot to 185 from 105 during PTI’s tenure and they stalled the prices of diesel and petrol because they knew that they would lose power.” She said that the country was brought to the brink of bankruptcy; however, they [PTI leaders] aren’t ashamed of holding press conferences.

Maryam said: “When a player is brought into the government from the cricket ground, this is what happens.”

“He [Imran Khan] doesn’t know what economy is. In these last four years, he has pushed Pakistan four hundred years back,” the PML-N leader said. “Imran Khan should give answers to the public on his own.”

She further accused the PTI chairman of using his “conspiracy lies” to hide from the failures of his government, alleging that former information minister Fawad Chaudhry appointed his family members [to government jobs] and spent heavy sums on them from the national treasury.

She also criticised Usman Buzdar’s government in Punjab. “You will find Farah Khan in every department. It was Farah who was running the province, not Usman Buzdar,” she alleged.

Immediately after Maryam’s comments, Fawad Chaudhry took to Twitter to demand that the PML-N leader reveal within 24 hours the names of those he purportedly gave jobs to. “If you fail to do so, I will send you a legal notice,” the PTI leader added. Maryam also called out the National Accountability Bureau (NAB) for dragging out the cases against her.

“When NAB was in their [PTI’s] control, they thought they could manipulate us. There were appeals for hearings on a daily basis and quick decisions. But ever since Imran’s ouster, NAB has been clueless. They make excuses at every hearing because they don’t have evidence.”

She claimed that if NAB had evidence, 10 months would have been sufficient to present it to the judges.

Subsequently, the PML-N leader requested the IHC bench and Chief Justice Athar Minallah to stop the “violation of my rights”.

“My honour is at stake when I come to court. I want to request the court to take notice of NAB’s unfairness as justice delayed is justice denied.”

Anyone involved in “political engineering” should be brought to justice, Maryam demanded.