Those who could have foiled conspiracy ‘did not act’: Imran 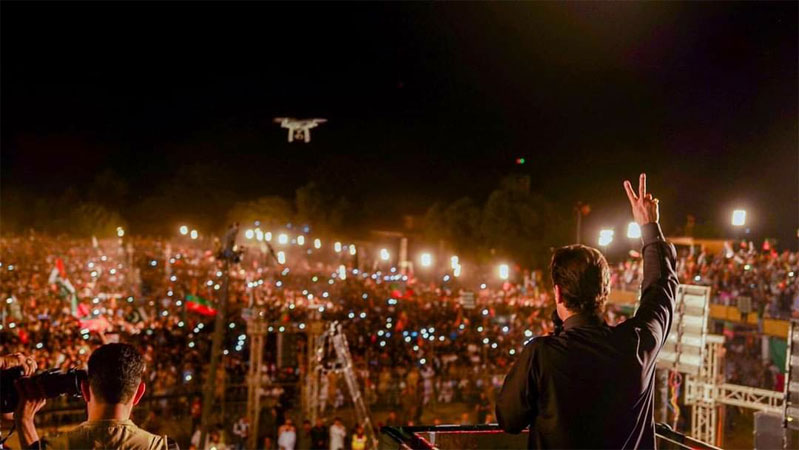 PTI Chairman Imran Khan on Thursday said that he had informed the relevant quarters that the country’s economy would take a plunge if the “conspiracy” succeeds, but nothing could be done about it, a private TV channel reported.

Addressing a rally in Attock, the former prime minister said that he talked to “those who could have stopped the conspiracy” and also sent the then finance minister Shaukat Tareen to have a word with them but it turned out to be a futile exercise.

Speaking about his anti-government campaign, the former prime minister said that it is not about politics anymore but has turned into a Jihad (holy war), adding that he will never accept “thieves and slaves” ruling the country. “I am ready to go to jail and even die for this cause but I would never accept becoming a slave to the United States,” he said. Berating the current government, the PTI leader said that the current leaders have bowed down in front of the United States of America.

Imran reiterated his allegations that foreign conspiracy was behind his ouster from power, saying: “Not America but Biden administration conspired with ‘three stooges’ to topple my government”. “This is a decisive moment for our country to decide whether we want to live in an independent country or remain a slave of the US,” he said while asking his supporters to participate in the long march to Islamabad to achieve the “real freedom”. “I am asking the courageous youth to participate in the war for real freedom like people participated for the independence of Pakistan in 1947.”

Hitting out at his political opponents, Imran said the coalition government led by Prime Minister Shehbaz Sharif came into power to end accountability process and get relief in corruption cases.