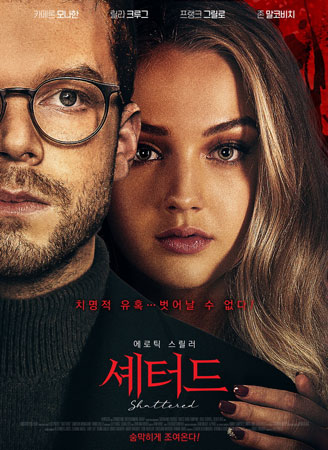 You’ve not known humiliation until you’ve had John Malkovich pant “Walk of shame!” at you as you skulk back to your motel room. That is one bizarre moment in this halting and derivative thriller, which exists somewhere on the continuum between erotic and psychological. Malkovich puts in a batty turn as a motel owner that would have had “paycheque” written all over it except for his co-producer credit. The shamee in question is Sky, a permanent resident at the motel who, thanks to a chance encounter in a supermarket wine aisle, has just bagged the attentions of local tech millionaire Chris. Living alone in a wood-panelled designer home and estranged from his wife and kid, this emotionally constipated app developer is obsessed with his security system. But Sky, living in fear of an abusive roommate, activates his protective side. As well as volcanic nookie, they bond over their deprived childhoods. Alas, she is not who she says she is. Subtlety is not director Luis Prieto’s strong suit – and he struggles to build tension or much emotional connection to the pair.