General elections only after electoral reforms 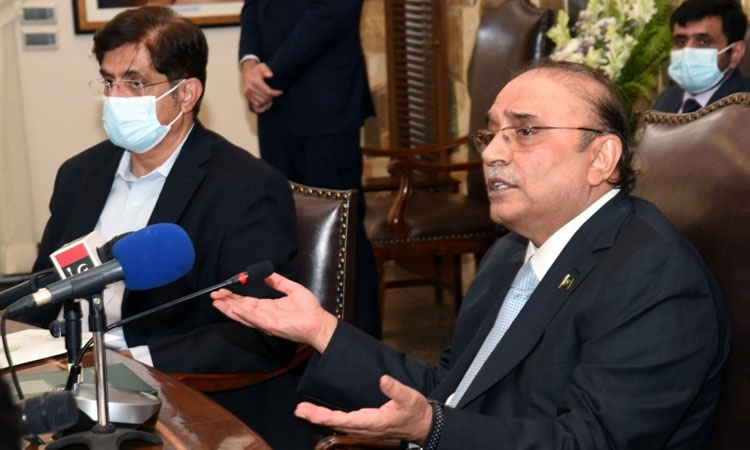 Former president and PPP Co-chairman Asif Ali Zardari says Pakistan will go for the general elections only after the government has introduced the electoral reforms.

“Electoral and NAB reforms are included in our game plan,” he said while addressing a press conference in Karachi on Wednesday.

Zardari said if polls were held before reforms, then any government that came into power will face the issues that the past and present governments were facing.

Electoral reforms will take three to four months, he said, adding that the government will not go for elections without them.

“We do not want any selected person to come into power again”, Zardari said, adding that he had persuaded PML-N supremo Nawaz Sharif on the electoral reforms ahead of the elections.

He said the government will take all the coalition parties on board ahead of making decisions.

“No one listened to me when I stressed holding fresh elections when this selected [PTI-led government] came into power,” said Zardari, adding that the coalition parties had removed the selected government after working together.

Berating the former prime minister, the PPP co-chairman asked: “What will PTI Chairman Imran Khan do by holding the elections soon? What has he done in the last four years for the nation?”

“People in Islamabad have a mindset that no one gets the votes in Sindh except PPP,” said Zardari, adding that Khan should contest the elections in Sindh and see how many votes he gets.

He further said Khan had misled overseas Pakistanis through his rhetoric. “They [overseas Pakistanis] do not know the ground realities here,” he added. He said the coalition government had no issue with voting rights and representation for overseas Pakistani, adding that a number of seats could be specified for them after discussions.

Zardari also called for “out of the box” solutions to fix economy, as the country faces an uphill task on the fiscal front.

Zardari maintained that the new government would take some time to control the situation.

Zardari said the nation would have to face problems until the coalition government finalised the programme with the International Monetary Fund (IMF). He said the government removed the selected PTI-led government from power with the help of political power.

“We did not take any votes from the PTI’s dissident lawmakers,” he said, adding that he has come to power to know the prices of “aaloo, tamatar, unlike Khan.” The PPP leader said the government will have to find solution to all the problems the country was facing, adding that he wanted to have talks with the traders.

He also criticised the former regime’s economic policies and said the incumbent government will have to make its own policies to put the country on the track to progress and prosperity.

Reacting to Imran Khan’s criticism of the army chief over his apolitical role, Zardari asked: “Should Chief of the Army Staff (COAS) General Qamar Javed Bajwa be saluted for [keeping] the army apolitical or shall he be criticised?”

He maintained that the government will try they remain apolitical and neutral in future.

Responding to a question, the PPP leader said the government will not tolerate criticism of the army at “any cost” and vowed to restore bureaucracy in the country.

Zardari lashed out at Imran Khan for hurling allegations at the leaders of the ruling collation and dubbing them “Mir Jaffar and Mir Sadiq.”

Reacting to the diplomatic cable and the alleged conspiracy attached to it, Zardari said: “They [the PTI government] drafted the communique themselves. There could be a diplomatic cable but probably it will not be sent by any state and the PTI should show proof if they have any.”

Zardari said in Pakistan there had always been a perception that conspiracies were being hatched against the country. “That is, however, not always the case.” In response to a question about Defence Minister Khawaja Asif’s interview in which he said the possibility of holding elections before November could not be ruled out, Zardari said the PML-N leader had his own thoughts and was bound to listen to his party’s directives. “The PML-N decided with me that until electoral reforms were brought, there would be no [talk] about the new army chief’s appointment.”

Once the electoral reforms had been introduced and the economic situation had improved and the parliament believed it was time to go for elections, polls could then be held, he added.

Talking about the judiciary, which has been criticised by the PTI Chairman Imran, Zardari said he had never run a campaign against them.

“Pervez Musharraf kept me in jail for five years but we did not attack his house and I have said internationally, I want to see Musharraf alive.

“I think we should let the institution do its work and help them.” He alleged that the bureaucracy had been destroyed during the PTI government’s tenure and relations with other countries were “not even present”, which the incumbent government would try to improve.