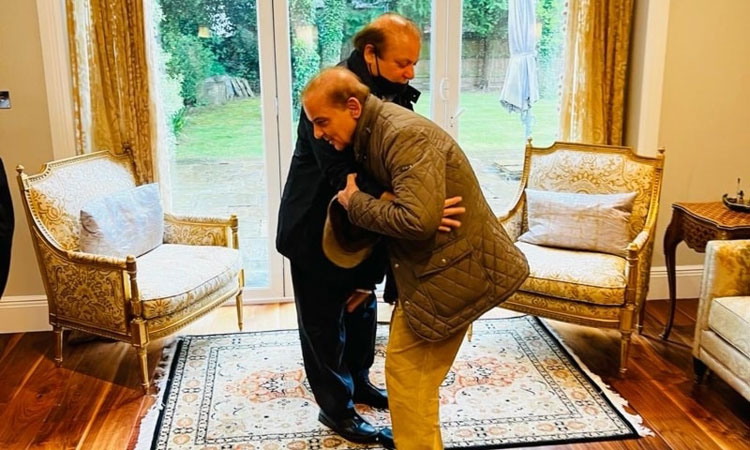 Prime Minister Shehbaz Sharif on Wednesday met his elder brother and PML-N supremo Nawaz Sharif in London. No details regarding the meeting’s agenda were officially released. However, observers believed political and economic situation of the country was discussed during the meeting and some ‘major decisions’ were on the cards. Nawaz warmly greeted Shehbaz as the latter arrived at the former’s residence in the United Kingdom capital. PML-N leaders Ahsan Iqbal, Miftah Ismail, Marriyum Aurangzeb, Khawaja Asif, Shahid Khaqan Abbsi and Khawaja Saad Rafique were also present on the occasion.

Earlier, after a cabinet meeting chaired by Shehbaz, the government’s spokesperson had said the purpose of the visit was consultation on key issues facing the country which, she stressed, was not an unusual process in political parties. Nevertheless, the decision of Prime Minister Shehbaz to visit the party supremo in London has already given ammunition to Imran, who was quick to lament that it was an insult to Pakistan that the prime minister and cabinet members were going to attend a meeting in London on public money, summoned by an “absconder”. However, Planning Minister Ahsan Iqbal was quick to counter the claim. He tweeted that the delegation was not utilising public money as everyone had purchased tickets from their own pockets and personally made arrangements for their stay in London. “This itself is enough to prove Imran Niazi [is] a liar,” he added. However, the timing of the prime minister and his top leadership’s visit to London is being questioned, with observers asking why such a trip is necessary when the country is in dire straits. Sources say that several key decisions may be taken in the meeting, including settling the question of early elections, developing a strategy to counter the PTI and prevent an oncoming price hike.