Minister for Planning, Development and Special Initiatives Ahsan Iqbal Wednesday said the government was giving special priority to the youth of the country in the incoming budget for fiscal year 2022-23, as number of new initiatives were being considered for them. He said in the upcoming budget, the government would introduce multiple skills training projects for the youth to enable them earn their livelihoods besides contributing to the country’s productivity.

Addressing media in the federal capital, the minister said the budget would enable youth to get more employment opportunities in the upcoming fiscal year.

He said in the next budget the government would also give special focus on the education sector and will increase fund allocation for the higher education. Projects of sports and recreational activities would also be introduced in the upcoming budget, the minister added.

With respect to the flagship project of China Pakistan Economic Corridor (CPEC), Ahsan Iqbal regretted that the project was ignored during four years of previous government, as not a single review meeting on the project was held after the Joint Coordination Committee between Pakistan and China in September 2021.

He said the PML-N government used to hold fortnightly review meeting on CPEC projects and now this routine was being resumed to expedite work on the projects under CPEC.

Iqbal shared that he had met with representatives of many Chinese companies working in Pakistan, who had complained of many unresolved issues. The minister said that he assured them of resolving their issues on priority.

Furthermore, he said keeping in view the recent incidents, the government had decided to ensure fool proof security for the Chinese working in Pakistan.

The minister added that due to increase in fiscal deficit by the previous government, the government had to cut the federal development budget to only Rs500 billion. 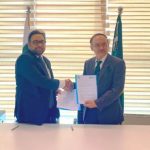