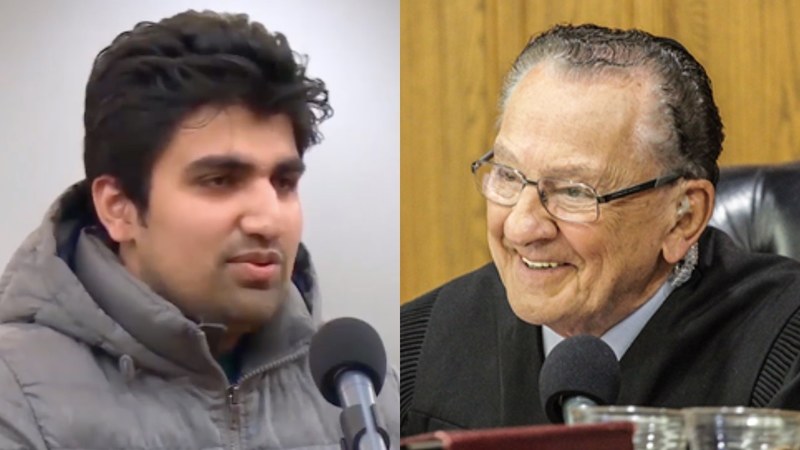 A Pakistani student won the heart of an American judge through his conduct and sweet talk and got the reward he deserved.

Ahmad Salman, a Pakistani student studying cybersecurity in the United States of America, appeared in the court of Judge Frank Caprio after receiving three parking tickets some time ago.

During questioning by Judge Caprio, Salman said outright “I’m guilty” and explained that he got these tickets during snow days. He also told the judge that he was popular in Pakistan like everywhere in the world and that Pakistanis simply love him.

As the judge asked him if he has his family in the United States, Salman replied in negative.

However, he told Judge Caprio, “You are my family”. The judge was touched and he wished that Salman may raise his own family in the United States in future. Impressed by Salman’s conduct and his emotional talk, Judge Caprio invited him to a family dinner at his residence.

As Salman arrived at Judge Caprio’s residence, he got emotional, thanked the judge for the invitation and told him, “This is the best day of my life.” At the family dinner, Judge Caprio treated Salman with Pakistani food and a lot more.

The Facebook page carries the video with this caption, “A student from Pakistan impresses Judge Frank Caprio and is invited to his family’s Sunday dinner. #CaughtInProvidence”

Salman later turned to the Facebook page of the “Caught In Providence” to express his gratitude to the judge. He wrote, “Judge Frank Caprio Thank you for your hospitality. It was an honor for me to meet you personally and your kindness and love for humanity is beyond words. May God bless you always.”