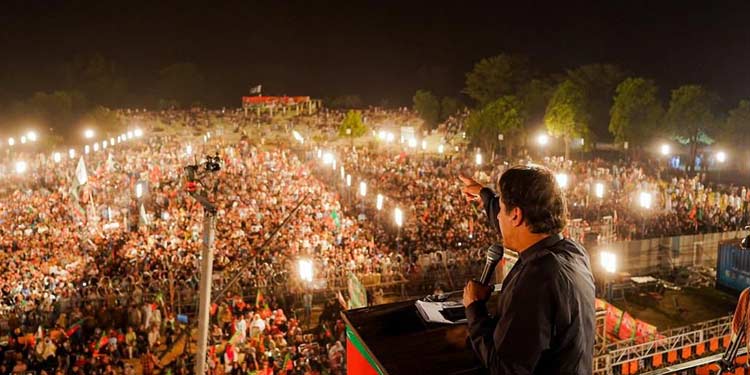 JHELUM: PTI chairman Imran Khan on Tuesday speaking to a jalsa in Jhelum said his party and the country’s armed forces were the two things “keeping Pakistan together”, as he lashed out at Prime Minister Shehbaz Sharif.

The PTI chairman has held a series of jalsas in different cities, including Karachi, Mianwali, Lahore, and Peshawar, as he rallies his party workers and leaders against the government ahead of the Islamabad march.

In his address to the Jhelum jalsa, Khan said PML-N supremo Nawaz Sharif and PML-N Vice-President Maryam Nawaz were speaking against the army, not him.

“But you, Shehbaz Sharif, are saying that I am speaking against the army?” Khan said in response to the premier’s notice on the PTI chairman’s recent Abbottabad speech.

Khan said he referred to PM Shehbaz as Mir Jaffar and not the army. “The British had awarded Mir Jaffar for his betrayal, just like the Americans have rewarded you.”

Berating the PML-N leaders, the ex-prime minister said during his tenure, Indian Prime Minister Narendra Modi did “not dare” to speak against Pakistan’s army.

“Did Nawaz Sharif or Shehbaz Sharif ever speak on Kashmir?” the PTI chairman questioned, as he mentioned that during his visit to Russia, he had asked President Vladimir Putin for providing Pakistan oil at a cheaper rate.

Khan said the Russian president had “agreed” to provide oil at a 30% cheaper rate to Pakistan, “but will Shehbaz Sharif dare to buy the oil from Russia?”

The PTI chairman said America does not meddle in India’s affairs — despite it buying oil from Russia — as New Delhi has an independent foreign policy. “But slaves cannot stand up for the nation.”