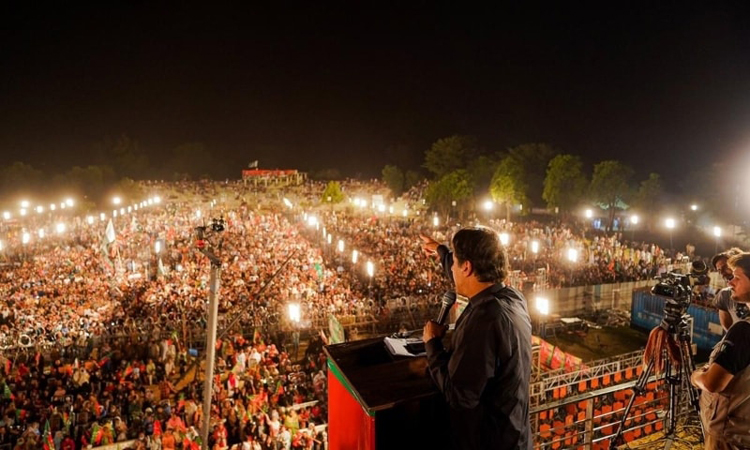 Former prime minister and PTI Chairman Imran Khan has said that the ‘real Mir Jaffar and Mir Sadiq of the nation’ is Prime Minister Shehbaz Sharif and not head of the state institution as widely perceived following his address in Abbottabad on Sunday.

“Shehbaz Sharif is real Mir Jaffar and Mir Sadiq who is installed as the prime minister through a foreign conspiracy,” he said while addressing a public gathering in Jhelum on Tuesday night “Have some shame Shehbaz Sharif. You are the Mir Jafar that I talk about,” Imran said. “[PM] Shehbaz Sharif you should be ashamed of yourself for saying that I am attacking army… Nawaz and Maryam attack army and cherry blossom [PM Shehbaz] polishes boots,” said the ousted premier. “Put my name on ECL [exit control list]. I don’t want to go abroad I have to live and die here,” he added.

Imran also claimed that the Pakistan Army and his party were the only two entities keeping the country from “breaking apart” in the face of alleged propaganda campaigns being run by India. He alleged that India had established “600 media houses”, which he said were being used to wage propaganda against Pakistan, particularly against the army and himself. “Why did India target the army and Imran Khan? Because they are the only two [forces] that will keep the country united today,” Imran said, adding that it was the effort of the country’s enemies to break it apart into “three fragments”.

He claimed that propaganda was waged against the two because “they (India) know that Pakistan won’t break apart while these two remain.” Imran also criticised the premier’s decision to visit London with members of the PML-N to meet Nawaz. The PTI chairman railed against Nawaz as an “absconder” and a “convict” who he said had summoned the “entire cabinet to London”.

“This entire cabinet is going to London on your [tax] money – they won’t spend their own money,” he told his party workers and supporters. Imran said the cabinet members would “take instructions” from a person who “always runs away from the country whenever there is a problem”. This was the reason, Imran said, the nation had stood up and decided that “this imported government is unacceptable.”

Imran reiterated his allegations that his government was toppled through a US-backed conspiracy and local “Mir Jaffar and Mir Sadiq (traitors)” colluded with America for the same. Referring to Dawn leaks controversy, Imran said former PM Nawaz gave impression to India that he wanted friendship with India “but army did not”.

He also accused the past and incumbent rulers of destroying the country’s economy and pushing the country into debt trap. “Who made nation a beggar they stole nation’s wealth and made offshore assets worth billions of rupees,” he said.

“When I give the call for long march after the [May] 20th, I have only one demand [that hold] early elections and we do not accept this imported government,” he added. Imran also lashed out at PPP leaders, saying that he will soon visit Sindh and rid the province of former president Asif Zardari. “You [Zardari] have looted the nation and sent money abroad! I told you when I have been ousted I will become more dangerous for you… I was waiting to be amongst my nation… I thank God for my nation’s support!”