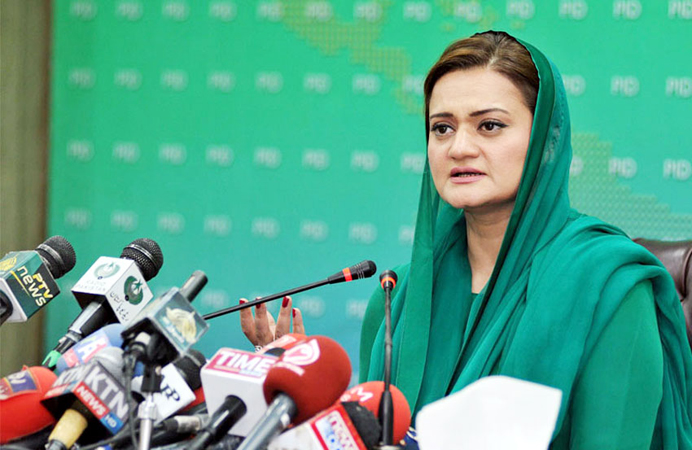 The constitutional posts of president, governor, speaker and deputy speaker were disrespected and misused at Imran’s whims, and that was tantamount to an attack on the Constitution, she said while talking to the media after the Federal Cabinet meeting chaired by Prime Minister Shehbaz Sharif. Flanked by Minister for Energy Khurram Dastgir Khan and Minister for Law Azam Nazir Tarar, she said the cabinet discussed constitutional violations of the PTI leadership and directed the law minister to take measures for preventing recurrence of such transgressions. Violation of the Constitution would not be tolerated at any cost, she vowed.

She said the cabinet decided to continue selling sugar and flour at the rates fixed earlier under the Ramazan Package. A 20 kg flour bag would be sold at Rs 800 instead of Rs 950. Likewise, she added, sugar would be available at Rs 70 per kg instead of Rs 85 per kg. The prime minister directed to ensure selling of the commodities on the fixed rates, she said, pointing out that a complete ban was imposed on the sugar export to bring its price at affordable level.

The minister recalled that the PTI government had allowed export of sugar and created its artificial shortage to hike its price to Rs 152 per kg. The commodity was imported on the pretext of its high prices, which had ultimately put extra burden on the masses. She said the cabinet accorded approval to the import of three million metric tons of wheat for a specified period only. During the previous PML-N government, Pakistan was exporting wheat in 2018, and efforts were afoot to again make the country self-sufficient in its production. She said the prime minister also directed to introduce an incentive-based agricultural policy that would enable the country to curtail wheat import.

As regards the inflation, Marriyum said a comprehensive monitoring mechanism was put in place by Prime Minister Shehbaz Sharif soon after taking charge of his office, to ensure availability of three essential commodities – sugar, flour and ghee at the rates fixed in the Holy Month of Ramazan for providing relief to the masses. The provinces were also taken on board in that regard, she added, noting that “autocrat” Imran did not bother to consult the provincial authorities.

The minister said PM Shehbaz – led coalition government would steer the country out of the challenges. The prime minister would soon address the nation to announce the reform packages, and would also present the facts on Imran’s claim of conspiracy before them. She stressed the government was planning to give relief to the people. A comprehensive strategy of overcoming the scourge of loadshedding and reduce transmission losses was in place.

She said the cabinet also approved revocation of more than one foreign passport possessed by a Pakistani national under the Passport Act, 1974. It was decided that such passports should not only be revoked but also a strategy should be adopted to prevent it in future. She said last date for the cancellation of dual foreign passports was December 31, 2022. Till the date all procedural and administrative arrangements would be finalized to take legal action against dual foreign passport holders. The cabinet was told that a strategic plan was being shared with the friendly countries stressing the vision of initiating employment generating projects, and providing relief to the countrymen. A delegation of economic experts from the UAE also visited Pakistan after Eidul Fitr.

Various teams of economic experts and power were working over different projects and the details of those projects being completed with the cooperation of Saudi Arabia and the UAE would be shared with the people.

To a query, she said the “politically unemployed” PTI leadership was trying to build a false narrative on the visit of a PML-N delegation to London for meeting party’s supreme leader Nawaz Sharif, which was part of the consultative process. Prime Minister Shehbaz Sharif would also accompany the delegation.

Consultation in the political parties was not an unusual thing, she said, adding those who were trying to give a false impression did not have any such culture in their own party which took all its decisions in line with the whims of a single person. The PTI leadership had nothing to their credit and that was why they were spreading fake news and resorted to building a false narrative on the so-called foreign conspiracy.

The cabinet approved the decisions taken by the Economic Coordination Committee in its meeting on May 9. She said the cabinet accorded approval of appointing Industrial and Commercial Relationship Director Muhammad Masood as Member Pakistan Ordinance Factories.

It also approved appointment of Admiral (Retd) Salman Ilyas as Managing Director Shipyard Engineering Works and Asadullah Khan as Director General Intelligence Bureau. The resignation of WAPDA Chairman Muzammil Hussain was also accepted by the cabinet. The Member Finance WAPDA was given the additional charge of chairman till the appointment of new one.