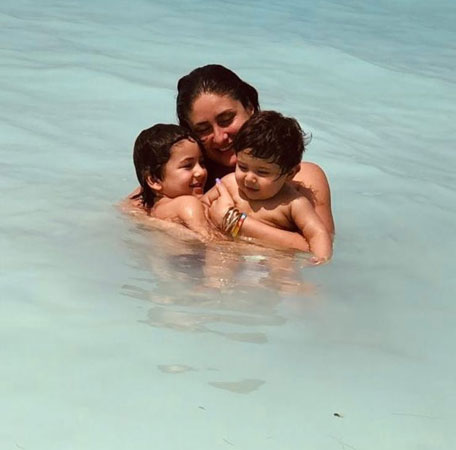 Kareena shared a photo on her Instagram stories where Taimur was seen posing with two of his friends.

Photographers also shared a video of Saif and Kareena as they posed with their son after his feat.

One of the fans in the comments section compared him to Tiger Shroff and wrote, “They are training him just like TIGER SHROFF.”Another fan shared their love for Taimur and wrote, “Tim Tim is the smartest”

Recently on Mother’s Day, Kareena shared a photo with her sons on social media and wrote in the caption, “The length and breadth of my life ?Happy Mother’s Day?” The photo had Kareena posing with her sons Taimur and Jeh in the sea.

In an earlier interview with Vogue India, Kareena had spoken about Taimur and called him ‘mini-Saif’. “Tim likes people. If there are people at home, he wants to be a part of it. Tim says, ‘Abba is my best friend. It’s wonderful and it’s also a silver lining in this pandemic that families have taken on a different prominence over the last year. We are very grateful that we’ve become closer as a unit.”

On the film front, Kareena will next be seen in Aamir Khan starrer Laal Singh Chaddha, which releases in August. She will make her OTT debut with Sujoy Ghosh’s The Devotion of Suspect X, co-starring Jaideep Ahlawat and Vijay Varma. Kareena is also set to collaborate with Hansal Mehta and Ekta Kapoor on an upcoming project.