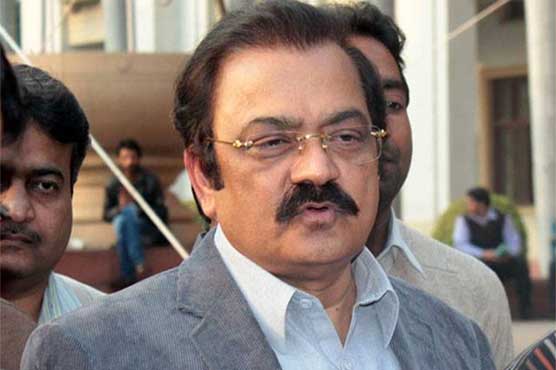 FAISALABAD: Interior Minister Rana Sanaullah Khan said that Imran Khan’s government was destined to collapse as it failed to fulfill its election manifesto and commitments made with the people.

Addressing a workers convention late on Monday night at Pansra, he said the previous corrupt and incompetent government had categorically assured that all problems would be resolved within 30 days, corruption would be curbed within 90 days and 10 million jobs would be provided to youth.

The entire manifesto was based on white lies which failed to even start work on its lofty claims and instead its focus remained on victimization of opposition. This situation played havoc with the economy and unbridled inflation made the life of common people miserable.

Rana Sanaullah said, “We came to power just three weeks ago and it was revealed that corruption was prevalent everywhere”. The governance system was choked, postings of deputy commissioners and DPOs were linked with monetary benefits and in this connection no one could hope that such officers could discharge their professional duties efficiently.

He lamented that instead of presenting his performance Imran Khan was supporting Farah Khan who was not a public office holder. He said that former rulers had booked him in fake case of 15 Kg heroin when they failed to trace any illegal thing against him. He said that previous rulers not only destroyed the economy but also distorted foreign policy.

Similarly, Pakistan’s principled stand on Kashmir issue also suffered a major setback. He said that when allies of previous government decided to leave them because of their continuous fascist polices and incompetence the government itself collapsed.

“We neither bribed any parliamentarian nor received vote of any PTI dissident parliamentarian during no-confidence motion”, he said and added that when allies were supporting IK then they were good guys and when they criticized his incompetence and bad governance the previous government started the propaganda of so-called conspiracy.

He said the propaganda of American conspiracy was a preemptive ploy as Pakistan Tehreek-e-Insaf (PTI) was expecting a shameful defeat in the upcoming elections. He asked if Farah Khan and Usman Buzdar were also a conspiracy of United States.

He said that when Jehangir Khan and Aleem Khan were with IK all was well and good but when they rejected his ill-conceived policies he started dubbing it as US conspiracy.

Rana Sanaullah said that the election could not be won through propaganda and public meetings. He said that IKs public meetings were five times bigger in 2011 but he could manage only 26 seats in National Assembly. He said that previous government had initiated a new technique of loot and plunder. Due to their failed polices dollar jumped to Rs 180 which shattered national economy.

He said that in 2013 when Nawaz Sharif came into power, there were two visible and immediate problems of load shedding and terrorism. “We made promise to rein in these challenges and successfully resolved these issues”, he added.

He said that current load shedding was due to the incompetence of previous rulers who failed to import gas in time which resulted in the closure of gas-fired power houses. He said that this was the year of election we were fully committed to holding elections immediately but the Election Commission of Pakistan had requested the Supreme Court to give at least 7 months to make proper arrangements.

He said that coalition government would present budget in June with reasonable relief to people and other segments of the economy. About the much-trumpeted long march of PTI, he said that we will give them due respect it they remained peaceful but strict action would be taken if they tried to create unrest in the country.

Rana Sanaullah said that he would visit every union council to identify the problems confronted by the masses and resolve the same on an immediate basis, however, mega projects would be launched after success in general elections.