Imran must be reined in before it’s too late 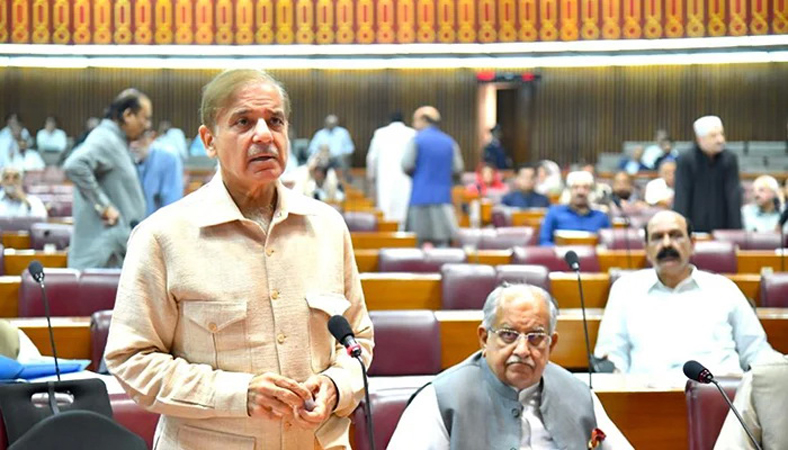 Prime Minister Shehbaz Sharif Monday said PTI Chairman Imran Khan’s statements against a national institution was in fact a conspiracy against the country, which needed to be stopped immediately to avert chaos.

Addressing the National Assembly, he said if this situation was not controlled, then Pakistan could meet the fate of Syria and Libya. He said this institution, which was now the target of Imran Khan’s criticism and being referred to as Mir Jafar by him, had extended unprecedented support to his government. “If it was not stopped using constitutional and legal means, it can lead to chaos. He (Imran Khan) wants to wind up the democratic system. Notice should be taken of his remarks. This should be controlled, otherwise, no one will be spared,” he commented.

Referring to the Pakistan Tehreek-e-Insaf chairman’s narrative of regime change conspiracy by the United States, the prime minister said Pakistan’s ambassador in Washington had explained that the conversation (with the US official) was threatening but it had nothing to do with any conspiracy against Imran Khan’s government.

Citing examples from the history of threats to Pakistan, the prime minister said Henry Kissinger had threatened Zulfikar Ali Bhutto to roll back the nuclear programme, US official Richard Armitage had threatened Pakistani officials after 9/11 and Russia wrote a threatening letter to Yahya Khan.

“Every day, we hurl threats to India and India does the same to Pakistan. Should we call it a conspiracy?” he remarked.

He said it was Imran Khan who had wished Narendra Modi to win the election hoping that he would be helpful to resolve the Kashmir dispute, but the latter even did not respond to his call.

He said the letter by the ambassador was also read out in the National Security Committee meeting, which, too, in a communiqué stated to have found out no clue to any conspiracy.

He said PTI Chairman Imran Khan was ‘poisoning’ the minds of Pakistanis with his speeches targeting the state institutions. “The nation has been divided, as Khan has repeatedly called [the then-Opposition and now government] thieves and dacoits,” he said.

Terming Khan’s Abbottabad speech “dangerous”, Shehbaz said the PTI chairman told his supporters that Nawab Siraj-ud-Daulah’s commanders-in-chief were “Mir Jafar and Mir Sadiq”, which was a direct reference to Pakistan’s institutions. “There can be nothing worse than the words he used for the institutions in his speech,” the prime minister said, slamming Khan for spewing venom against the institutions, which was tantamount to a ‘conspiracy’.

Shehbaz said the institution which Khan was targeting had “pampered him like a child” and he was “their favourite when he was in the government.” “I want to tell this house that this institution has not supported any government or prime minister in the last 75 years like it supported Imran Khan Niazi,” PM Shehbaz said as he criticised the PTI chairman for failing to deliver.

The prime minister said the previous government did not import oil and gas on time, resulting in the power crisis. He also blamed them for importing expensive gas, which caused a “huge loss” to the national exchequer.

Shehbaz berated the PTI government for keeping some power plants shut, which were gradually opening now, and resultantly, there was a slight decline in load-shedding. “The next generation has been mortgaged, there can be nothing more unfortunate than this,” the prime minister said, lamenting the uphill economic challenge his government faces.

But the prime minister said he will take notice of the electricity crisis and respond to the house in this regard soon.