All plans to arrest me will ‘backfire’

* Imran Khan says US used us like a tissue paper, imposed 'thieves' upon us and made a joke of Pakistan and its constitution 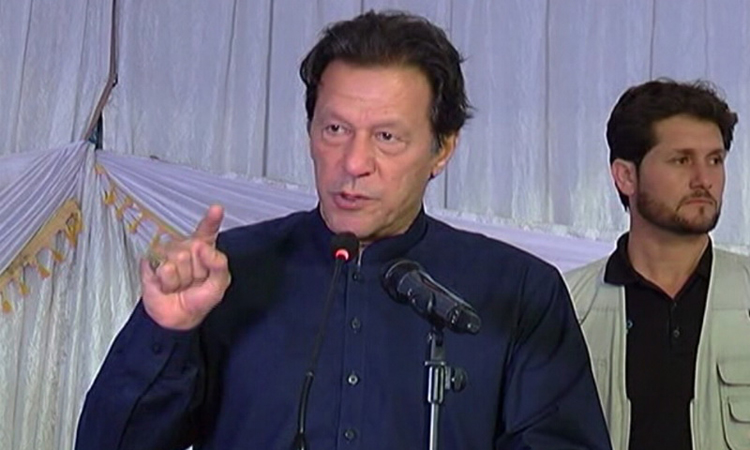 PTI Chairman and former prime minister Imran Khan Monday said his campaign against the coalition government was not political but a jihad and termed Sharifs a family of ‘liars’.

Addressing the party workers, he claimed the government wanted to arrest him but warned that all plans against him would backfire.

He said criminals were sitting in the Parliament and wondered how would Pakistan progress if they ruled the country. He claimed that India celebrated when the incumbent government came into power.

“I have no properties outside; I will stay in Pakistan […] I will never want something which damages my country,” Imran said, slamming the government for “having an FIR registered” against him.

Imran said his party only wanted one thing: early elections – which had been the PTI’s demand. Imran said he would give call for the Islamabad march after May 20 and asked the workers who could not join him in the federal capital to protest in their respective cities once the march begins. The PTI chairman said it was incumbent on his party workers to reach out to the people, engage them, and ask them to participate in the anti-government protest.

Talking about when he was in power, Khan said overseas Pakistanis had sent unprecedented remittances and had it not been for their money, the country would have defaulted.

“Overseas Pakistanis send their money to Pakistan, and the corrupt leaders here siphon it abroad,” referring to the government leaders. “Tell me, which country’s prime minister lives in the most expensive area of London?” The ex-prime minister said when his party came into power, the external debt was at a historic high of $20 billion. “But we brought in the most dollars and increased the exports.” The PTI chairman said there was record agricultural growth during their tenure and unemployment was also substantially reduced. He added that his government, despite facing COVID, saved the economy.

Criticizing PM Shehbaz for pointing a finger at him, he said his elder brother used to badmouth the army and that too only after leaving the country.

“Now he’s saying that he’s the saviour of the army… his elder brother not too long ago used to say bad things about this army. Who are you to say that we’re talking about the army?” he added.

Taking aim at Nawaz’s daughter PML-N Vice President Maryam Nawaz, Imran said that she was only spared for her anti-army narrative because she was a woman.

“The elder one (Nawaz) used to say bad things about the army abroad and his daughter used to do the same here and because she was a woman no one used to say anything to her but both her brothers left the country,” he added. He said Shehbaz Sharif and Nawaz Sharif were real Mir Jaffars and Mir Sadiqs of the country.

Why is India happy? Because they know your elder brother Nawaz Sharif talks bad about his own army,” he said and added that Nawaz Sharif used to meet Indian Prime Minister Narendra Modi secretly in Kathmandu. “What were Dawn leaks? Simply, it was a message to India that our army is now in our control.”

He claimed that Shehbaz Sharif had killed most people in police encounters and now a “criminal” is heading the interior ministry of the country, in a reference to Rana Sanaullah.

“Wherever you go, you will hear slogans such as thieves and traitors,” he added.

Reiterating his stance on the “threat letter” by the US, he challenged that America would have never sent such a “threat” to India as it would know it will draw a strong reaction.

“They say such things to us because they know we won’t take a stand… they use us like tissue paper. They knew cherry blossom (Shehbaz Sharif) will be the next prime minister,” he added. “They have imposed this dirt upon our country… they have imposed thieves upon us. They have made a joke of this country and its constitution.”

Saying that his long march would change the course of this country, Imran Khan urged everyone to participate. “When people become a nation they can achieve everything,” he further said.